… into your home in the morning relieves the chill from the night before … and so it was for the early settlors of the Verde Valley who chose to build their homes into the side of the cliff facing east over Montezuma’s Well to the east of I-17 near Rimrock, AZ. You can almost see the people coming out in the morning, basking in the sun and perhaps the smoke coming up from fires used for cooking … about fifty feet below is water of the well which flows up from below … about 1.5 million gallons a day at a nice 74 degrees F which also had to help moderate the temperatures in the winter when temperatures can drop into the 20’s and summer when it can hit the low 100’s. 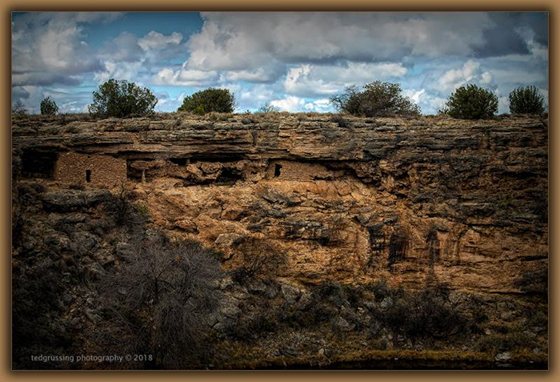 If you have never visited the Well, you should, the history of the Sinagua people and others who lived here more than a thousand years ago is well worth learning … history is best learned, as if you do not know where you have come from, how can you know where you are? Or where you are going?

They have a lot of new graphics and text displays at the Well since the last visit I made there a year or so ago … the water which is a carbonated water with about 80 times the carbon dioxide content of normal spring water has created a very unique eco-system unique to this place only. It has provided untold millions of gallons of water used for irrigation of farmland which provided sustenance for those who lived here … the water that is filling the well today has been traveling underground for about ten thousand years before emerging from the floor of the sinkhole about fifty five feet below the surface of the water. Regardless of drought or no drought the water flow remains constant. More on it at: https://www.nps.gov/moca/planyourvisit/exploring-montezuma-well.htm
A fun day spent with friends visiting from Northern Wisconsin today … visited the Well and many other sites in and around Sedona. Much fun.
Time for a wrap … have a beautiful day … keep breathing and wear a smile … we’re alive and can create a beautiful day for ourselves and others.
Cheers
Ted