I don’t think I have ever sent out a photo of Strawberry Crater before, so it seems like a good idea to do so tonight … Strawberry is a relatively recent volcano located about 20 miles north of Flagstaff, Arizona. It is estimated that the cinder cone was formed somewhere in between  the ninth and eleventh century AD. Forest Service road 545 which provides access to the crater runs along the bottom of the photo. I understand that it is a great place to photograph the surrounding area from … pretty good from my vantage point too :+) Also along the bottom if you look very close you can see power lines going across the image on a slight diagonal.  For reference I am on the south side shooting to the north. 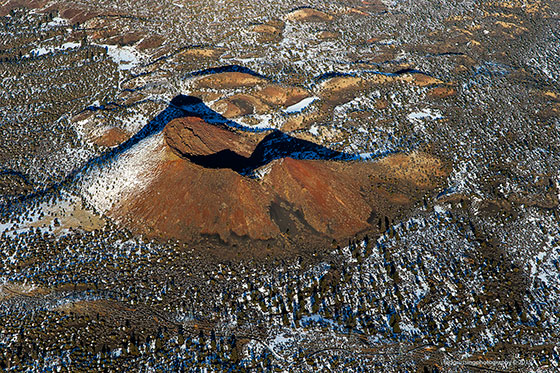 The terrain in the vicinity is around 5,500’ and the peak is about 6500’ … a very cool place to be sure … likely I’ll never see it from the ground, but I do like the inaccessible and beautiful areas I can go without four wheel capabilities … and share the views with you too :+)

A kinda funny day today … woke around 6AM, had six shots of espresso in lattes, decided to get a little more sleep and conked out, waking at 10AM feeling like it was Sunday morning … no such luck, so three more shots of espresso, exercise, weights, treadmill and out to paint the trim on the golf course side of the house … forecast being rather damp for the next several days I decided to go fly and took a friend along with me. It was overcast, cool and looked very much like the winter day that it was. We landed about 5:40 and I was about forty minutes late getting to the Hilton. Several others had gone there, but when I appeared to be a no show they left … except for one, and we had a very nice dinner and conversation. Anthony was great. Promise, no more flying late afternoon on Wednesday and likely I will be more or less on time in the future. Sorry.

A rather unplanned day underway … maybe some stucco patching … delete photos … try and get caught up on emails … we’ll see how it shakes out.

Have a beautiful day … the only one we have a choice on how to live it … gotta love the present … it is all we have.

Piglet sidled up to Pooh from behind … “Pooh”, he whispered
“Yes Piglet”?
“Nothing,” said Piglet taking Pooh’s paw, “I just wanted to be sure of you.”
— A.A. Milne