… I have heard from so many that are wondering if the aerial photos are nearing an end. Simple answer is no … I have more than ten thousand aerial shots that I have not yet processed and also I will be flying with a friend in his motorglider periodically and that will be welcome. This way I can focus completely on the photo shoot and he will focus on keeping us off the mountain … hitherto I have had to do both at the same time. 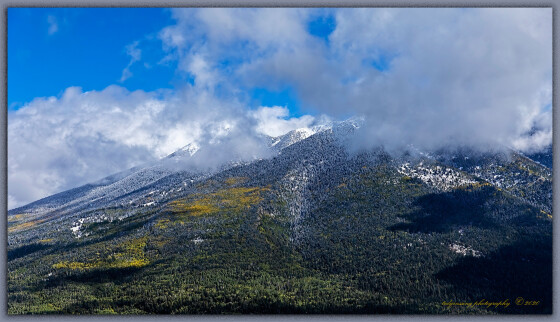 This shot was taken back in October of 2018 after a very early snow fall that coincided with peak color at the San Francisco Peaks. In this shot, the near mountain is Agassiz with its peak in the clouds and behind the near ridgeline coming off Agassiz, is Snow Bowl. The far peak, also shrouded in the clouds is Humphreys Peak, the highest peak in Arizona, at 12,637′. It was a beautiful day up there.

Have a beautiful day.

Give me to gladly go
My way, and say
No word of mine own woe;
But let me smile each day.
— Max Ehrmann