… noodling through some old photos this evening and came4 on these two … above is one of the most well fed Bobcats that I can remember seeing and he is resting next to a fresh mound of dirt that a vole had just created that morning. Sleepiness would disappear as soon as he sensed the voles presence and he would score a fresh meal and the golf course would need to eliminate one less pest.

Below is a photo a friend took as Corky and I were coming in for a landing at Sampley Field in Aguila. Turf Soaring had closed a year or so before … Corky liked to fly and so we bought into a Schweitzer 2-33 so that she could still get off the ground and enjoy soaring flight. A couple of years later we bought the motorglider and sold our interest in this glider … and it was a delight to no longer fly back seat in this one … very cramped back there! 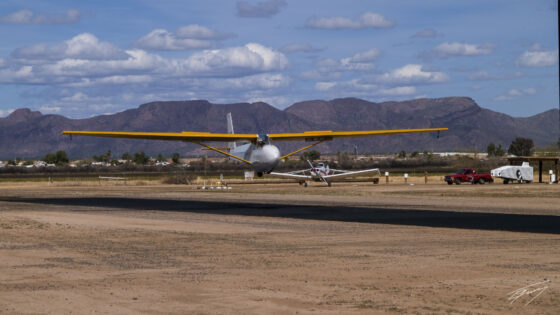 Wednesday is here … wow, the week is rushing by … going shooting flowers with a friend in the morning so hope to have a nice one to share with you tomorrow night.

Have a beautiful, day and enjoy each moment you are granted!

Sleep quietly, now that
the gates of of the day are
closed. Leave tomorrow’s
problems for tomorrow.
The earth is peaceful.
Only the stars are abroad;
and they will not
cause you any trouble.
Sleep by Max Ehrmann