… and light and a few nice colors describe a late afternoon flight up north last week. I took this shot shortly before we cut a trail back to Sedona so we could land a minute or so before sunset. We climbed up to I think just shy of 15,000’ so that we could get shots of the shadow of the San Francisco Peaks extending outwards almost to the Little Colorado River … anyhow it was pretty cool getting the shot and with the Painted Desert assuming a nice color as well. 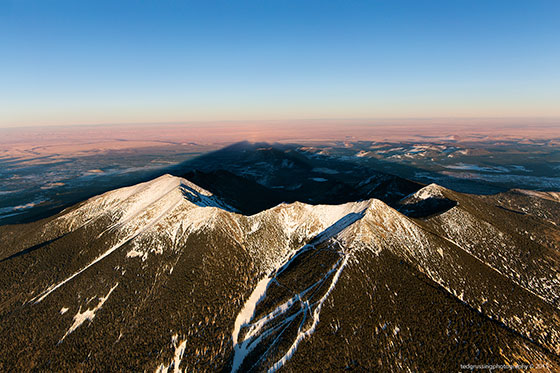 In the foreground is Agassiz Peak and the Snow Bowl runs coming down the ridgeline and in the basin to the left. Humphreys Peak is to the left and with just the very top of its peak catching light in the shadow is O’Leary… in the shadow you can see the peaks of Humphreys, Agassiz and Freemont peaks … maybe Doyle too … just above Agassiz and lit up is Sunset Crater and way out above it is Roden Crater … to the right of it with the N facing slope still covered with snow is Miriam Crater and while hard to make out just to the right and up a bit N and S Sheba craters. These last three craters are frequently used by Hang Glider pilots … my soaring buddy Bob Thompson who flew with me on Friday used to fly off these craters as well as Mt. Elden which is off screen to the right. From Elden he and another friend no longer with us flew their hang gliders to the North Rim of the Grand Canyon and back … in 1984 … and the only two hang glider pilots to do so.

I really need to get back in the air … I am getting ground sick!

Two friends I took up last week have got some images online from our flights. Wayne Ranney has done a full blog post with many photographs he took on the flight as well as much good information and you can read his blog at: http://earthly-musings.blogspot.com/     Guy Schmickle posted a beautiful shot with the smoke over and in Sedona and the Verde Valley backlit by the setting sun and you can see it and his comments at:   https://www.flickr.com/photos/50264123@N00/16264211715/ . Both Wayne and Guy comment on the smoke from the slash piles and in their photographs you can see what we are breathing. During this same period ADEQ’s monitoring station in Sedona did not pick up any significant concentration of fine particulate matter … like how can it not? If you can see it and if you can smell it, it is harming you. Wood smoke according to many studies is as  harmful if not more harmful to humans than tobacco smoke … re read the Washington State study I sent out last week. As Guy says in his comments we made lemonade out of lemons and I got a few nice ones of it too. I hope the nice folks in the USFS will take a close look at these photos because seriously when you can see smoke like this, monitoring stations or not, harm is being done to humans … beautiful though.

A very busy day coming up and deletions of photos continue … at least I don’t have to burn them :+) Okay, a little pollution from the source that provides my electricity.

And over every lake, and over the crest of every hill, and over the green level of every open field,
and if we could but see, over the sky-obscuring houses of every city …is God painting His revelation.
— Max Ehrmann