… I went down to the ponds with a friend this afternoon and it was fun … strong winds, few birds and some rain. As we were heading back to the car, this great blue heron flew and I got a bunch of shots of him as he swung between the parking lot and me on his way to another pond further to the north. 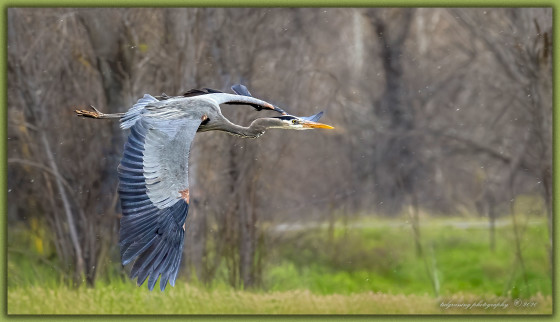 A very neat feature of the higher frame rate I have now, is that it gives me more opportunities to get shots with wing positions that I like. The camera shoots at 16 frames p/s, the heron has a slow wing flap rate, but it is still a little over two complete beats p/s … thus I am getting eight frames per complete wing flap cycle. In this photo he has begun a right turn … note that the left wing position is more or less level providing maximum lift on that side and his right wing is dipped quite low which is providing very little lift. The result is that he is angled into a turn to the right; his tail feathers show a similar position and this along with a weight shift initiates the turn to the right. In an airplane we achieve the same result with the ailerons, elevator and the rudder. To turn right the right aileron will be raised and the left one lowered providing more lift on the left side and raising it while the rudder provides the horizontal pressure turning the plane to the right and a slight back pressure on the elevator keeps the plane level. The herons tail feathers provide the functions of the rudder and elevator.

Some wing positions are cooler than others and it is nice to have more to select from … some of the positions are kind of awkward looking and whilst necessary for flight find their way into the bit bucket. The specks of white throughout the photo are rain drops … could be snow … can see this in the Saint Paul, Minnesota area 🙂 … subtle hint to a friend!

Have a beautiful day … keep breathing and smiling. Into the weekend and back Monday morning if all goes as planned.

A bird flies through the sky, and I fly with it. I am in
each pearl of moisture sparkling in the sun. I lie lazy
on the clouds. And I acknowledge my kinship with
each winged thing.
I see all as one, and nothing repels me, as this new
day climbs noiselessly out of the valley of night.
Peace lies over the world and over the world of my soul.
— Max Ehrmann