By Ted Grussing
December 29, 2021No Comments
Facebook Twitter Pinterest LinkedIn Email Reddit WhatsApp
Share
Facebook Twitter LinkedIn Pinterest Email Reddit WhatsApp
… I cycle through the years ePhotos on my three monitors throughout the day and spent more than a few moments looking at these photos today … they brought back memories from the year present and many years back, so I’ll share them with you too.
The top image is of my high performance sailplane at Sedona airport years ago. It was a fantastic soaring day and I was flying with a friend … we were waiting for the towplane to get here from Aquila and then we were off. The opening in the nose serves a dual purpose as a vent to bring in outside air and also the tow hook is located inside there. We use a line about 200′ long to attach to the towplane … then into the air and adventure. I began flying sailplanes out of Sedona in 1997 about six months after my first lesson at Turf Soaring in Peoria, AZ. There was a compass rose at the airport in those days which we used to swing the compass and calibrate the electronic equipment.
The photo below was taken by our friend Bennie Blake in February of 1994 from her home on Oak Creek at Red Rock Crossing. We had a wee bit of rain that year … the bridge at Tlaquepaque was underwater and at the crossing the creek was raging and hundreds of feet across. The west is prone to long periods of drought followed by years of extreme rainfall … and just about everything else too. Going back thousands of years we find that drought is the norm in the west with droughts in excess of 200 years common. One of the wettest centuries in the last 7,000 years was the 20th century and that is when mankind began the intense settlement of the west . 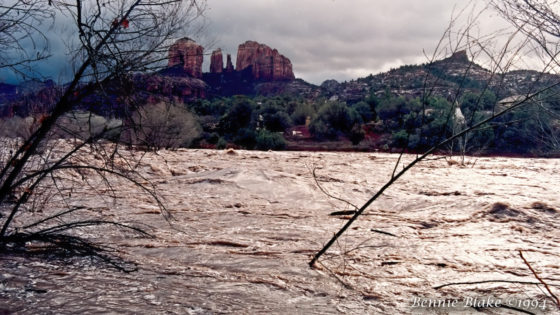 This photo of my wake exemplifies the beauty of being on the water … clean lines and adventure … then there is the beauty of maple trees in the fall with brilliant reds against the greenery of the forest … can there be a more beautiful photograph of the San Francisco Peaks Inner Basin than this? Kendrick Peak glistens in snow, peak fall colors and a brilliant Arizona blue sky filled with clouds. Here the San Francisco Peaks are poking through the lower cloud layers and catching a few rays on the peak of Fremont peak and Doyle … and finally my usual engine off landing at Sedona near days end … after 12 years of flying pure sailplanes, it always seemed more normal to land with the engine off after I bought the motorglider.
More of I do not know what tomorrow night to close it out for the year … then it will be a fresh start Monday the 3rd as we bring the new year in … much beauty, life and joy to share in the new year … 2022, wow!
Have a beautiful day, keep breathing and choose to share the miracle that is life with others.
Cheers,
Ted
Cold lies the lifeless earth, the birds are gone, and through the naked trees the shrill wind whistles. Though the world outside be chill and dead, may the world within us resound with gleeful songs, and the chambers of our hearts be warm with hope and love. And may many an evening’s merriment, beside the hearthstone’s cheerful glow, make sweet the passing time.
Max Ehrmann
A Winters Prayer