… I did my best not to disturb the wildlife at the ponds as they prepared  for another night, feeding, sunning themselves and soaking up the last rays of the sun. The reflections of golden pond banks and blue sky elicited a feeling that all is well on planet earth … and it is! In the back we have a drake Ring Neck duck and in the foreground a drake Blue Bill as they swam up the far side of the pond I was shooting. 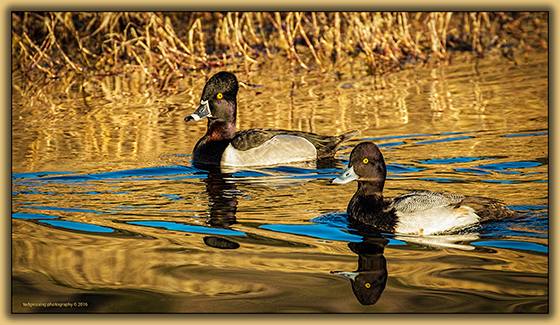 Another quiet day around here too and One enjoys the warmer weather and spent over an hour outside today. She sticks pretty much to our yard … it is safe and I provide courtesy  backup for her.