… mostly this email will be about ripping the earth asunder, but before we do that I want to direct you to a really cute song and video that my friend Seal’s partner has just released … “The Puppy Song” and if it doesn’t bring a smile to your face I would be surprised and this is a wonderful time to smile. Carrie has some amazing music that I have enjoyed for a long time and hope you take the time to enjoy it too. https://www.youtube.com/watch?v=6HPB_1xSC0k

Now we can rip the crust of the earth asunder … actually this rip was done a very long time ago and faulting along with erosion has formed Oak Creek Canyon and to a large extent, under reported, the same fault formed Jacks Canyon on the NE side of the Village of Oak Creek. From SR 179 you can take a right at Jacks Canyon Road and head up there and further up the canyon is Pine Valley (both part of Jacks Canyon) and then beyond that, the canyon takes a sharp turn to the N and that is where we are at the bottom of this photo. Looking up Jacks Canyon you can see where it jogs sharply left at the end of Munds Mountain and then continues up Oak Creek Canyon and Oak Creek Canyon further up turns back to the N heading up towards the San Francisco Peaks … and there is some thought the the fault originated at the Peaks when San Francisco Mountain erupted blowing the top three to six thousand feet of the mountain off. The remnants of the mountain are now known as the San Francisco Peaks which surround the caldera of the volcano. From this vantage point the snow capped peaks you can see are on the left, Agassiz, to the right of it, Fremont and next Schultz. Next to the right of the SF Peaks is Mt Elden and then on the far right O’Leary Peak. Going to the left from the peaks is Kendrick Peak, then Sitgreaves Mountain and on the very left of the photo a tiny part of Bill Williams Mountain. 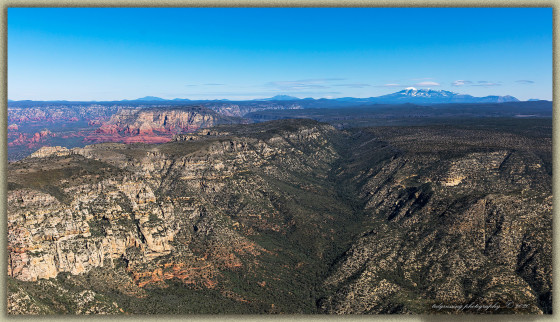 In the foreground of the image, on the left is Lee Mountain and where you can see the slight dip and gap in it, Munds Mountain begins.Above Munds Mountain and to the left where the fault jogs left before continuing up Oak Creek Canyon, is Wilson Mountain, a flat top volcano and if you look really close you can see the cone just protruding above the top on the canyon side, also the down slope which is I think called the shelf. This used to be part of the main volcanic cone, but earth quake faulting cut the cone into about 2/3rd and 1/3rd, dropping the 1/3rd part hundreds of feet and moving the whole shelf about a quarter mile to the east.

The entire east side of the rift is several hundred feet lower than the west side … big changes were made to earth’s crust here!

Uptown Sedona is visible on the extreme left side middle of the photo.

I took the photo this morning … perfect place to isolate, no closer than a half mile to anyone and what a beautiful place to be.

The winds aloft were really ripping too and beautiful lenticular clouds were forming behind the peaks … tempting!

Have a beautiful day, stay safe, keep breathing … smile too as we are truly blessed.

Give one loved hand to me,
And leave the eve
All undisturbed as we
Our strength of souls retrieve.
And lastly give sweet sleep
Closed sight, no fright
That fears will o’er me creep;
And now a last goodnight.
— Max Ehrmann