Today’s Photo from Ted Grussing Photography:
On a 3 mile 45

Sometimes I ignore one of the prettiest views coming into Sedona from the NNW and that is on the left side while flying a 45 degree angle for entry into a left downwind for R3, Sedona. So here is the shot taken on Monday late afternoon after Larry and I had spent an hour and forty five minutes shooting West Fork and other areas in the Sedona area. This is a view from about 3nm out looking ENE. The mountain on the left is Wilson Mountain and then Ship Rock and other named rocks (if they were birds I would call them tweety birds) as well as a view up towards Schnebly Hill Road. I suppose I should learn all the named rocks, but … there are still tweety birds out there :+) 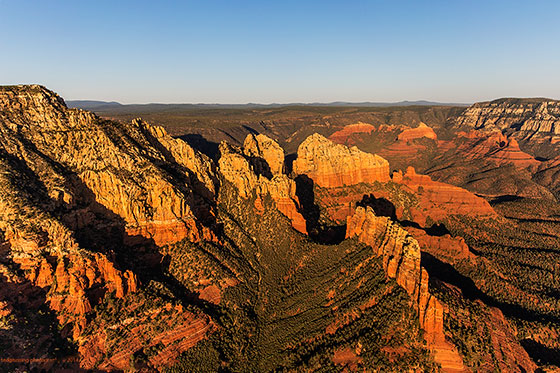 One is making herself comfortable on the desk in its new location and her favorite resting position is on the Wacom Tablet … time visiting with friends from out of town today … and with those who live here. A day permeated with love and laughter and I can think of no better way to live each day … tomorrow will soon be here; actually it is and the plan is to live this day in the same state of grace.

There is a fly in at Cottonwood this weekend with about forty Touring Motor Gliders from around the country participating in it. If you get a chance stop in and see them. They are magnificent machines and the people who fly them a group of really neat people.

Love men and truth, and poverty most like will dine with you,
But peace will feed your soul.
— Max Ehrmann