… there was an emergency meeting of the local Eastern Collared Lizards in Sedona this afternoon. Due to aggressive misbehavior by the Black Hawks in the region they are imposing sanctions on the Black Hawks … they have threatened to have fewer offspring which could decimate the population of Black Hawks with a decrease in the available food supply … surely this would deter the Black Hawks from their bad behavior. At 3:09 this afternoon the Black Hawks issued their response … they decided to take out the leaders of the Lizard movement that made the threats and attached is photographic evidence of the response. It is the response that fits with the nature of all life forms on this planet …survival of the fittest. 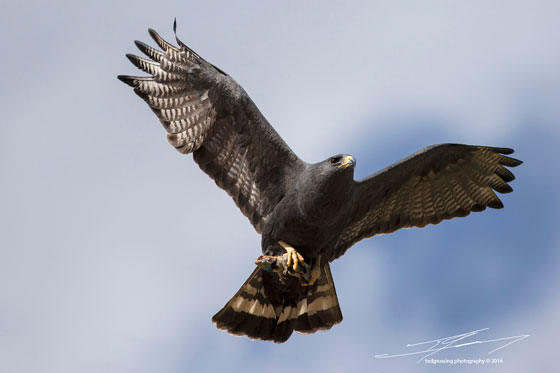 The true story is that I took a break from the computer in my office and was sitting in the living room working on my laptop when I looked up and saw a Black Hawk land in a tree less than a hundred feet from the house. The laptop made a quick trip to the floor, grabbed a camera, pair of shoes and headed for the door. I was able to get within a hundred feet of him and with the 400mm lens brought him right in. The wind was blowing hard in the 30kt range and he did not want to fly … but he did. So it was that I got one of the finest shots of a raptor that I have ever taken and he filled about 70% of the frame so it will blow up really good.

I thought about taking another shot at a crappy day, but it is just way to exhausting and difficult to even contemplate doing it. So easy living in the now and enjoying the gift that is the moment. Several walks, lots of law and visits with friends filled the day. Sent the photo to a few friends this afternoon … probably bragging … whoops, that borders on SP and Cork always said SPS (self-praise stinks) … just this once Cork :+) For those who care, camera body Canon 1D X, lens Canon EF 400mm f/5.6 USM. Shot taken at 1/3200 second, f/5.6, exposure bias, -.33, aperture priority, ISO 320, raw format.

Have a terrific day … say hi to someone new and smile