… sometimes it is fun to just throw stuff at the wall and see what happens and that is pretty much what happened tonight … I had flowers, planes, birds and mountains, but these three images seemed to blend and carry a story better than the others. The deity, the wooden horse head, the bear head and all against the backdrop of the cosmos. I think you can see why I like shooting the wood at Sunset Crater so much … it is amazing. 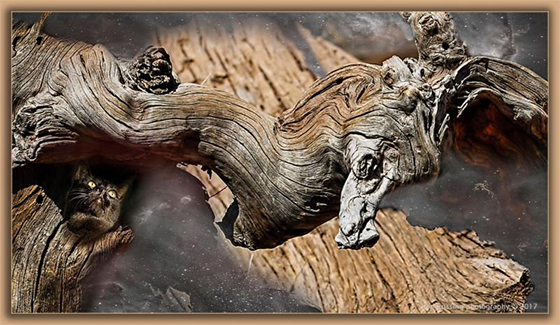 No ladybugs found today. Eric and I took off in his jeep this morning and headed down I-17 to the US 169 exit, over the highway and started down FS 64D and the 12 miles to Squaw Peak. After 4 miles we decided enough was enough, it was akin to being in a concrete mixer and we were fortunate the seat and shoulder straps kept us in the vehicle. So, the ladybugs were saved from an intrusion on their daily routine … and it was not necessary for us to make doctor appointments.

Fun day and I managed to accomplish very little … not only that, but I didn’t much feel like doing anything. I have been debating as to whether to polish a piece of opal for a couple of weeks and finally did it. Now I will be taking it off and replacing it with a 260 or 600 grit finish which is kind of like a light frosted glass finish. The reason is that the opal has one of the most beautiful purple play of colors that I have ever seen in opal, but the opal gel has a few issues, to wit a few cracks and impurities that are visible with a high polish, but hidden with the frosted finish. Also with the frosted type finish the entire stone just glows with color … so, tomorrow it is back to where it was before today and then I’m having it set for myself.

Time to wrap the day and week. I’m finding that I am keeping pretty well up to date on replying to emails with only sending them out four days a week … feel good to be current and for whatever reason, I never was when I was doing five days. Have a beautiful rest of the week and weekend. Smile when you open your eyes in the morning … you’ve made it into yet another day that will be filled with opportunities to make your life and the lives of others better for your having been here … and you’re still breathing :+)