… a slower than normal trip down to Lake Pleasant today due to low lying clouds and fog much of the way down there, but incredibly beautiful when rays of light pierced the clouds and silhouettes of mountains were visible through the low clouds and fog. The lake was absolutely calm when we arrived and launched the boat and low clouds hung over much of the lake. Very few critters had decided to start the day and it took a while before we saw much of anything … we were busy shooting of all things, landscape shots such as you see below. This shot was taken on the NE part of the lake looking south; the water we were in was perhaps two feet deep and in an area we usually find Osprey fishing … and we did find them later in the day from when this shot was taken. 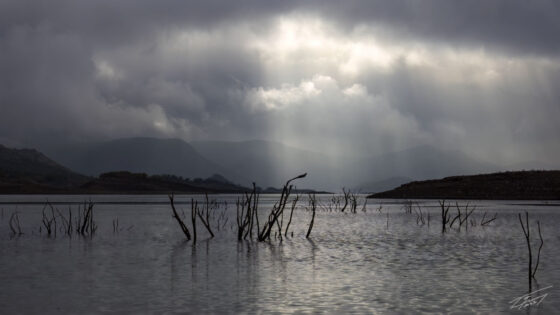 The shot above is of a pair of North American Coots … loved the symmetry of the wings and relative positions of each of them. Coots usually summer in the northern states and southern Canada and migrate to the southern tier states in the winter, from California to Florida and also into Mexico and as far south as Panama. Due to their rather inclusive diet they are not very tasty to us, and they are totally amazing creatures.

Gotta wrap this one, as it is back down to the lake early in the morning and find out what creatures and beauty will be found as we hunt and explore the lake and all the little coves … the lake was up three feet from last Friday, so they are beginning to fill it again … this is great because as the lake expands, there are more opportunities for me to get stuck in way too shallow water. Smiles!

Have a beautiful day … always my plan when I awake in the morning. Tomorrow night we both shall see how I did on the lake. Share a smile with someone today … maybe even two 🙂

Draw your chair beside me here,
As in other times, my dear;
Do not talk or even smile,
Sit in silence for a while;
Sweet contentment over all,
As the shadows on us fall.
‘Tis the best of all my life,
After each day’s toil and strife,
In the time of night and dew,
Thus to sit alone with you.

After The Day by Max Ehrmann