Today’s Photo from Ted Grussing Photography: Looking Back Millions of Years in Time 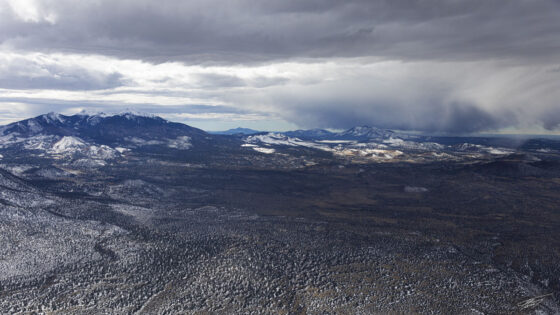 … when flying over the San Francisco volcanic field you get an appreciation of how earth has been sculpted over millions of years and in the photograph above you are looking back about six million years in time.

The first volcanoes in the field began around what is now Williams, Arizona and just to the right of the San Francisco Peaks on the left you can see Bill Williams Mountain far back, which is approximately 3.8 million years old … just to the right of it is Sitgreaves Mountain and to the right of it is Kendrick Peak which is about two million years old. The San Francisco Peaks on the left is the only stratovolcano on the field and was built by multiple eruptions over a period of about a million plus years to a height of about 16,000 feet; a lateral eruption 200 plus thousand years ago blasted the top several thousand feet off leaving the caldera surrounded by multiple peaks the highest of which is Humphreys Peak at 12,637′.

I was about twenty miles east of the peaks at 10,800 feet when I took this photo … a cold January morning at 8:31 AM. Quiet and alone, looking back in time over an active volcanic field … last eruption in 1085AD and the next one in ?

Earth, its features and climate are ever changing … always has been that way and always will be that way. Humans have only been along for the ride for about about two hundred thousand years and began forming civilizations about six thousand years ago while earth has been here for about four and a half billion years … so we have been around for about four ten thousandths of one percent of earths existence …not much.

The shot below is of a grackle in flight at Bubbling Ponds Hatchery in Page Springs … I love the form as he makes a course correction. 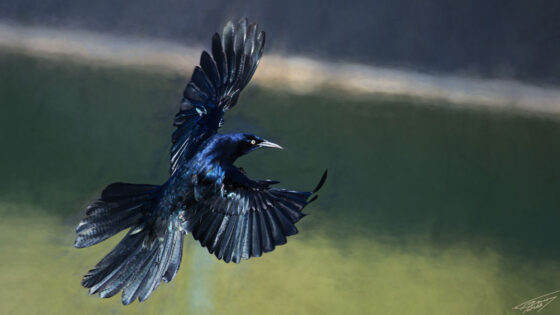 Into the weekend for me … have a beautiful day and enjoy the weekend … life is meant to be lived, so, live it … and smile too.

So each one to his wish, and as for me,
I sit to-night and wait
in slumb’rous moonlight late,
To feel the freedom of the world in me
Like waves of a shoreless sea.

excerpt from I Sit And Wait by Max Ehrmann