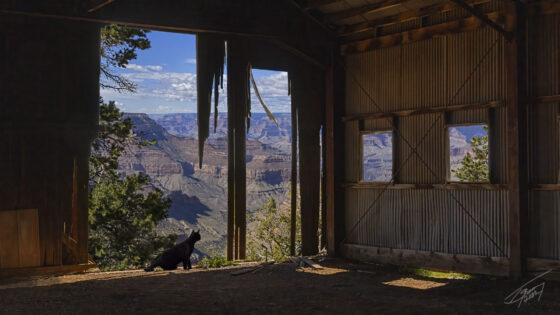 … and what a day it was … I was in the number 2 lane on I-17 heading into Phoenix, when BANG and some very weird noises. I was thinking blown tire, but I had full control and after pulling over and finding all tires in good shape, I looked up and whoops … the sunroof glass had exploded and although it is safety glass there was still a huge mess. So I continued on to my appointments and after them I used 200 mph duck tape (often used in aviation temporary repairs) to tape around the large hole and drove home. The part is back ordered so I will be driving with plastic, duck taped on the top for a while. Very glad I had the retractable cloth ceiling in place and not extended or it would have been a shower of exploding glass at 75 mph on my head and face. Whoops!

I finally decided not to delete all the photos I took at the Grand Canyon last week; although I have some very nice shots, I am not a Grand Canyon photographer, but they do make for use in composites where they serve as the backdrop for photos as shown above … a dilapidated building I shot earlier in the day before we hit the canyon and then Katie appeared in the photo looking out over the Grand Canyon from her safe space inside the old structure. The building is used by wild horses as shelter, but we did not find them on this trip … perhaps next time.

Bel;ow is a shot of a non flight feather of a white pigeon that had been killed by a Coopers Hawk in the back yard. This was a bird that the Coopers Hawk took in mid air and continued to the ground with it. After bringing it down, they pluck the feathers from the bird before enjoying their hard won meal. I shot the feather because it reminds me of the cycle of life and the purposes which each creature brings to its life. Some creatures are food and others who dine on them insure that the populations do not run away and overburden the local environment … the delicate balance which keeps it all going. I left the feather there and throughout the world such occurrences happen daily … once necessary for the birds life it is now separated and perhaps there is something further ? 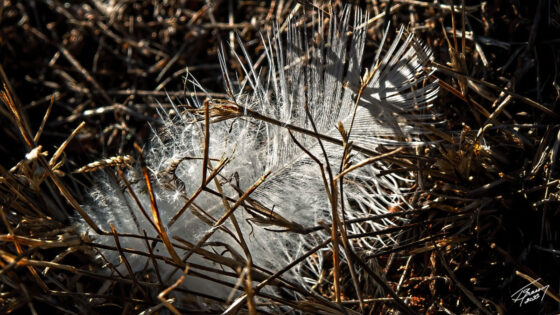 Into another beautiful day … enjoy it and smile, because for sure, we are here and no predator is coming for us today 🙂

Forbid that I should judge others, lest I condemn myself.
Let me not follow the clamor of the world, but walk carmly
in my path. Give me a few friends who will love me for what
I am; and keep ever burning before my vagrant steps, the
kindly light of hope.

excerpt from A Prayer by Max Ehrmann