… incredible beauty that we have to live with in Sedona … geez, I need a break already … down to about 7,000’ and about six miles west of the airport inbound for landing. After leaving the scene of last night’s photograph I headed southwest and came off the plateau just east of Sycamore Canyon. I wanted to do that as it would put the sun off the passenger side of the Lambada and I could shoot out the pilots side (that would be me) and get the low red light hitting the rock faces and giving me that beautiful color that we get each day just before sunset. 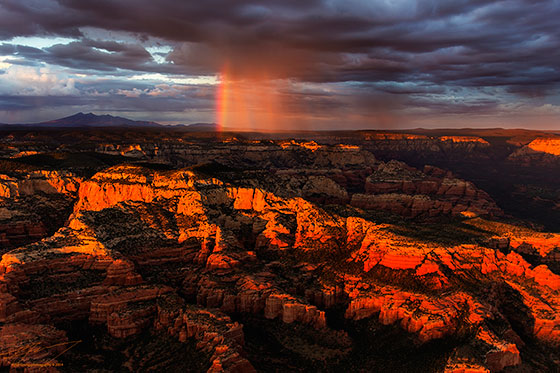 As a bonus the air was very clean as the USFS delayed prescribed burns due to weather conditions and you can still see the glow of the aspen on the west facing side of the San Francisco Peaks and rain coming down to the north and west of them. A bit of sun illuminating the south facing slopes and Mt. Elden which is right behind (about twenty miles) the rainbow which is getting blasted with beautiful light. If you look to the right side of the image, the darkish canyon is Long Canyon and you can see the Seven Canyons Golf course on the floor and as the canyon continues upward you can see a gap in the rocks and this is where there is a cut and entry to Oak Creek Canyon which then heads NW to the left in this photograph.  The rain and rainbow appear to be up near the switchback area at the top of the canyon. In the gap between the SF Peaks and Mt Elden you can see the painted desert lightly illuminated. In the foreground the plateau breaks off and behind me it continues out to Sycamore Canyon, Casner Mountain and all the other good stuff. As you can also see, most of Sedona is in deep shadow and only the top portions of the rocks are illuminated.

This afternoon I got a special treat with a crown replacement at Sedona Dental Arts by the good Dr. Bill. I mean this was really cool … David is very much into state of the art technology … after removing the offending crown, he used this camera wand to take hundreds of photos of my mouth (17 per second) which were fed into this cool machine with a display showing an accurate rendition of my mouth and teeth … it then determined the exact measurements and what would be needed for the new crown and sent the data to a special milling machine in another room which proceeded to mill the crown. About a half hour later David placed the new crown in my mouth and it needed absolutely no fit, grinding, bite adjustment or anything else … that was it. It was such a neat experience I am considering returning to my errant ways of going to bed with milk chocolate melting in my mouth … that’s what earned me the crown work I have … David reformed me.

Anyhow, the day was absolutely wonderful, time with friends, work and I made ice cream tonight … when you make it yourself you learn what disgusting stuff it really is, but I tempered it by using Stevia instead of sugar … just no substitute for heavy cream though :+) Geez it is good!

Have a terrific day and smile … return smiles sent your way too, or what should have been smiles … don’t let the grumpy ones get off that easy.