Today’s Photo from Ted Grussing Photography:
It was Saturday…

… and this White Crowned Sparrow was taking a bath – with exuberance and water was flying everywhere! I stopped on my walk and visited with a friend who’s backyard is like Nirvana for wildlife in the area … and of course I had my camera along. 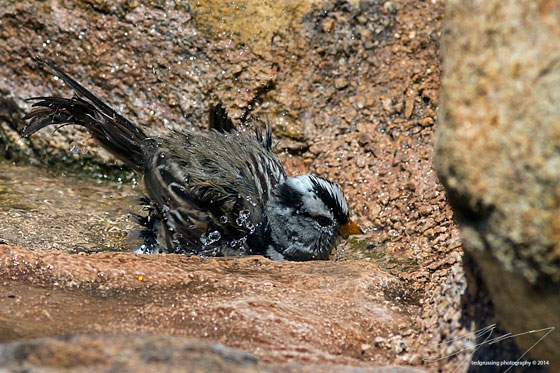 Starting Thursday night I went a wee bit nuts watching “The Americans”, two episodes Thursday night and on Friday eleven more ending 3:30A Saturday. Having finished Season One in such a short time led to five more episodes of Season 2 last night and tonight. Fun! Looks like “Justified” has another new season underway so will likely stream them too. Four months without cable television and loving it more and more.

I finally decided to establish a Bucket List; the first item on it will be to learn how to read a calendar … twice in as many months I have sent out the wrong date for our ISO 100 group meetings … fortunately others are not so challenged so the proper date is set soon thereafter.

Had a nice flight today, half power and half pure glider. The air was rocking and lift was good.

Into the new week … have a great day, share your joy and smile, the best possible way to share it.