… never ill intent, but simply a creature that daily lives by the rules of nature as laid out for her. A predator that fulfills her natural function in the complex order of life on planet earth. She has purpose which among other things is to keep lower forms of life in balance by removing them from the scene and providing nourishment for herself in the process. 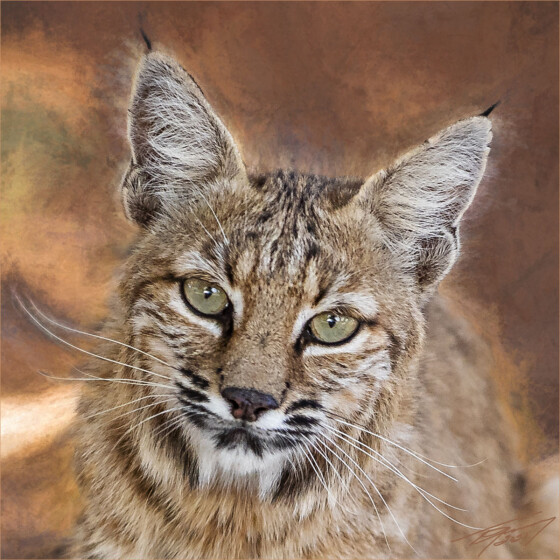 When man removes predators that he fears, the natural order is upset and bad things happen. Witness the east coast where large cats have been driven out from their habitat and in some cases are no longer found in areas they used to be prevalent … the deer populations are out of control and special hunts have to be called to thin their ranks out. The re-introduction of wolves in Yellowstone had a profound impact on the environment … a trophic cascade. The video is at: https://www.youtube.com/watch?v=ysa5OBhXz-Q The term “trophic cascade” is explained at : https://en.wikipedia.org/wiki/Trophic_cascade

Bobcats are among my favorite animals and I took this shot in our backyard. Animal portraiture is one of my favorite areas of photography; just look deep into her eyes … mesmerizing, she lives and helps maintain the balance of nature.

Have a beautiful day … keep breathing, keep smiling … another way to help change the course of life!

Though changed as are my songs from youth,
A voice within my heart still sings,
“Live thou in tenderness and truth, and love mankind instead of things.”
And often in the crowded mart,
With wrangling, selfish slaves of men,
These words like some old song will start,
And bring me to myself again.
— Max Ehrmann