Today’s Photo from Ted Grussing Photography:
How I wish

… that photos that are out of focus could be saved … but they cannot be saved and that is where the delete key comes in. Eric invited me to shoot some Hummers this evening and I got there a little early for the strobe setup he had, but still got a couple of shots that I saved. The photo that is going out tonight is already history and consists of scattered bits residing somewhere in space. Every time I looked at this shot I kept hoping some miracle would occur and I would have one of those super shots, but it was not to be … the bee came out great though :+) 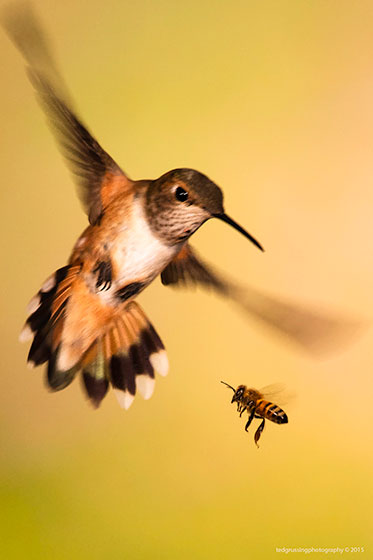 An almost shot … shoulda coulda woulda … the one that got away. Still, it was fun and appreciate learning the techniques that Eric uses to get his hummer shots. Eric gets some absolutely amazing shots; check some of his work out at his Flickr site: https://www.flickr.com/photos/egofreed .

Spoke with Derek this morning and he was going to be shooting waterfalls up at Mt. Rainier today. I’m hoping to do some shooting at Yosemite on Wednesday and then along the coast in and near Half Moon Bay later in the week. I get Mariah back early next week and plan on shooting what has got to be the greenest deserts in Northern Arizona in decades if not longer. We have been getting a lot of rain this year and that is good.

Time to wrap it … hope your day was good … focus … a very good thing to have in life as well as photography.