Today’s Photo from Ted Grussing Photography:
Gold in the snow

October of 2018 was probably the finest shooting of the San Francisco Volcanic field I have had in the 20 plus years I have been flying over Northern Arizona. The leaves were in peak color when an amazing amount of snow fell over a period of days and I was fortunate enough to get up on the plateau and spend hours shooting the beauty that was everywhere. One day the clouds were below the rim and there was no way to just head up there from Sedona … so it was up through a large blue hole in the clouds over the valley, up to 17,000′ and down through another large blue hole near the peaks … the reverse to get home after a couple of hours shooting. Fun! 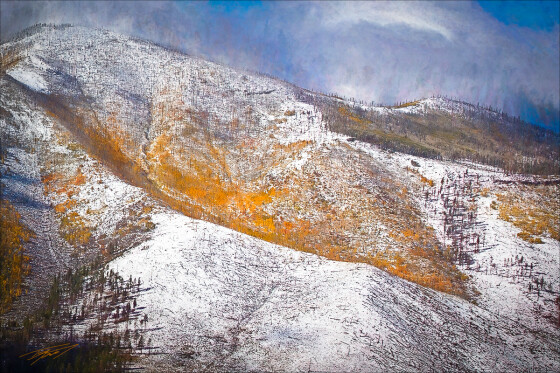 Anyhow this image is of the upper east side of Kendrick Peak which is located probably 10 to 15 miles NW of the San Francisco Peaks. Kendrick Peak is about 10,500′ and to me is the most beautiful of the volcanic cones in the field. I took a few liberties with the photo and hope you enjoy the beauty of gold and snow and clouds.

Have a beautiful day … stay true to your hopes and aspirations. Keep breathing and smile.

A bird flies through the sky, and I fly with it. I am in each pearl of moisture sparkling in the sun. I lie lazy on the clouds. And I acknowledge my kinship with each winged thing.
I see all as one, and nothing repels me, as this new day climbs noiselessly out of the valley of the night.
Peace lies over the world and over the world of my soul.
— Max Ehrmann