Today’s Photo from Ted Grussing Photography:
From other realms…

… the light brilliant … the source a star we call the sun … earth’s atmosphere the filter … earth’s surface the canvas on which the art is painted … and I got to see a masterpiece, capture it and share it with you. 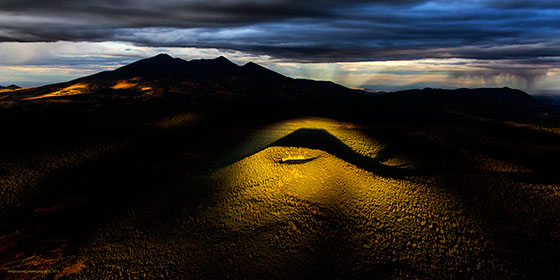 Late afternoon on Saturday I headed to the airport as the sky was beautiful, filled with clouds and I was hoping to get some of the late afternoon rays poking through holes in the clouds to give me something cool. I  cranked a climbing left turn on takeoff and headed north for the peaks … virga and rain cells were all over the place and cloud base was around 12 to 13,000’ with few breaks in the clouds on the plateau. The entire west facing slope of the San Francisco Peaks was illuminated by a beautiful large ray of light, but it had closed in by the time I was half way up there. It only takes me about fifteen minutes to get to the peaks once I start my takeoff roll, but things were cycling in a minute or two, seldom more than three minutes. So I hung around up there for a while taking what I could get and shot over towards Bill Williams Mountain and the residual of the prescribed burn that was still sending smoke into the sky … it looked pretty cool though, as though the mountain was in a cauldron and tongues of smoke were lapping up and over the sides. Sunset was at 5:48P and I had to be on the ground by civil twilight which was 26 minutes after sunset. I also wanted to get some shots of the rays on the red rocks and hoping for a rainbow or two from the rain and there was a very active cell near the north end of long canyon from which I did get some spectacular rainbow shots. So I headed back about 5:30P and about that time all kinds of stuff started happening as you can see in the photo.

Not sure what crater this is, but a spotlight was put on it and at the same time several areas on the West slopes of the peaks were illuminated by intense rays of light causing the aspen stands to glow … almost like lava flowing out the side of the mountain; on the left horizon you can see the North Rim of the Grand Canyon and on the right more rays pouring down on the Painted Desert and rain falling behind Mt. Elden and the clouds gave the appearance of and were indeed laden with moisture. Probably from a technical standpoint I should have just cropped the volcano and its shadow which would be an awesome photo, but I wanted to show you all of that which I saw simultaneously … the setting and presentation were absolutely amazing. I hung out retracing my steps several times getting as many shots as I could before the gap in the cloud closed and the volcano lost its special place in the landscape and night began to reclaim the surface of earth.

I landed right at the end of civil twilight and put the Lambada away in the dark. I knew I had captured some really remarkable photos, but had to wait until I uploaded to see how good they were. “My tripod” was mostly over 11,000’ msl and traveling across the ground at an average of about 130 feet per second … not quite like a land based tripod … but oh the difference :+)

Lots of fun this weekend and a very busy week coming up … air time is always planned too.

Share your joy, everyone needs to receive a smile so share that too … come to think of it, that is the joy of life … and breathing