… and the one atmosphere is all we get and because of the well meaning efforts put into place by the Four Forests Restoration Initiative, overseen by Greater Flagstaff Forests Partnership and with a whole host of environmental organizations and agencies, we are coming to the moment when it must be acknowledged that more harm is being done than good. The USFS is simply implementing the plan put into place to restore fire to the forest and attempt to make up for more than a hundred years where all fires were suppressed and the fuel load in the forest increased.

I saw all the promotional and educational materials that went into it and everything looked good and sounded good … but it wasn’t, because the collective group did not factor into its decision making the impact on human health, the harm to the environment by excessive smoke or, hardly mentioned even today, the impact on tourism which is the life blood of Northern Arizona’s economy.

Each year the USFS is given directives to burn more than the previous year … this year the burning has been practically nonstop and while one forest may not be burning, another is … even in forests not covered by this initiative. There is no Coconino Forest atmosphere, nor a Kaibab Forest atmosphere … there is only the one atmosphere which we share with all human beings and critters on the planet. One of the objectives and determinative factors as to whether to burn is whether or not the smoke will be transported out of the local area. So we put our sewage into the air and it comes down on someone else who knows not from where this gift has come from … that is the plan, but it does not always work out that way, more frequently than not it comes back down in our area.

This is a photo I shot back in January 2009 of the Navajo Generating Plant at Page, Arizona … it shows the emissions from the coal fired plant streaming down into Marble Canyon and then into the Grand Canyon. The two canyons are the same canyon, but at the Confluence of the Little Colorado and Colorado rivers it is decreed that Marble Canyon ends and the Grand Canyon begins. The plant has received its last train load of coal and it is expected to run out and close sometime in November of this year. Many of the environmental groups that formulated and participate in the Four Forest Restoration Initiative were also responsible for the efforts to finally close down this plant. Many of the groups and agencies used this photo to help make the case that something needed to be done with this coal burning plant. 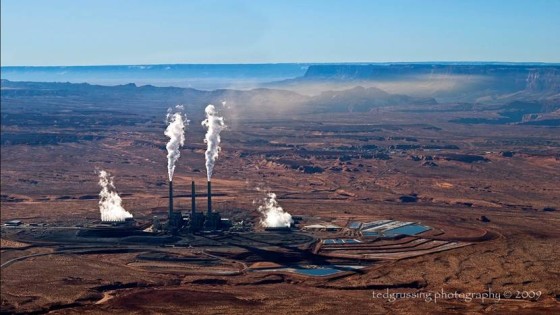 Now compare this photo with the photograph I took yesterday coming back from an unsuccessful fall color shoot at the San Francisco Peaks (too much smoke). The photo has been cropped, leveled the horizon out (kinda difficult to get it level when handholding and flying), otherwise absolutely nothing has been done to the photo. I was at 11,000’ approximately 10 miles NNW of Sedona. This is what it has looked like nearly every day all summer and everyone including infants, seniors and every age group in between is breathing this smoky air. So are all the animals and birds in the forest … they have lungs too. Particulate matter below 2.5 microns gets into the lungs and does not come out. As far as I could see in any direction it was the same … at least 10 thousand square miles and probably beyond. (distance to the horizon from 11,000’ is 128.5 miles) Smoke from the incomplete combustion of wood is very unhealthy. Can you imagine this much cigarette smoke … smoke from a generating plant? From the ground it does not look this bad because you are looking through not much space … if you look up you see blue sky, if you look at the red rocks or Mingus you will see a light white haze that obscures detail to varying degrees. This is what is actually filling the atmosphere and because the distance is greater the density of the smoke is easier to see.  The flat top mountain mid photo and left of center is Wilson Mountain and to the right of that is Thunder Mountain. The canyon on the left is Oak Creek Canyon and Long Canyon is just above the rim. 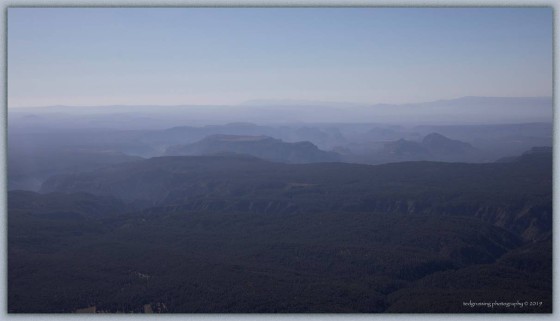 So contact the environmental group of your choice as most of them were in on this plan. The link to Greater Flagstaff Forests Partnership is: http://gffp.org/4fri/  and under the Who We Are tab you will find a list of every organization and group that is involved in this project. The list includes all the good guys … it is apparent that this plan is not working out and it is time to scrap it and start over.

Human Health is not a factor that they considered when coming up with this plan … neither is the impact on tourism. Please go to this website and starting writing to these very well meaning people about what it is doing to you and your family and implore them to reconsider their huge mistake! It is only going to get worse every year as the mandated burning increases!

Suppression of all fire was a mistake … this is too!

Have a great day and please make a difference! Keep breathing, but don a mask.

Give me to gladly go my way and say no word of mine own woe; but let me smile each day.
Give me the strength to do my task, I ask; and that I shall not rue the toilers grimy mask.
Give one loved hand to me, and leave the eve all undisturbed as we our strength of souls retrieve.
And lastly give sweet sleep, closed sight, no fright that fears will o’er me creep;
And now a last good night.
— Max Ehrmann