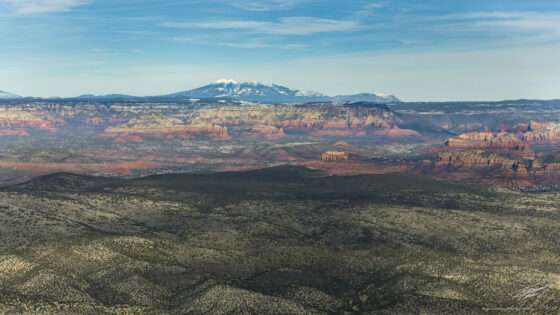 … thirteen million years ago, House Mountain began forming as a volcano began erupting. The lava flows had a very low viscosity, so rather than build a typical cinder cone, the lava flowed out over a very large are forming what is known as a shield volcano … only a thousand or so feet high, but spread out over a large area. At the time of the eruptions, the volcano was part of the Colorado Plateau and thus the lava flow went south, east and west. In the photo above, the green area in the foreground is the top of House Mountain as it exists today … cut off from the plateau by about four miles which is the result of millions of years of erosion. Just above House Mountain on the right side is Cathedral Rock and just above and left of it is Sedona Airport. Munds and Oak Creek Canyons are on the right side just below the plateau … then you have Wilson Mountain, also formed by volcanic activity and earthquake faulting. rising above it all are the San Francisco Peaks and on the right side of them is Mount Elden and on the left you can see the upward slope of Kendrick Peak. The Village of Oak Creek is off image on the right and the Loop area of Sedona, just above House Mountain on the left. A period of quiet before earth again changes the landscape.

The photo below captures the edge of The Inn Above Tide in Sausalito, California over hanging and looking San Francisco Bay … on the left side the Bay Bridge spans the bay and on the right San Francisco itself. Corky and I used to love to spend time up there, usually staying at The Tiburon Lodge … I may have to try this place. 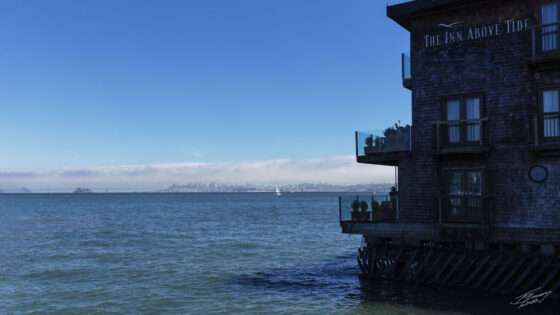 The day just past marked the 78th anniversary of D-Day when allied troops swept ashore at five beaches in Normandy, France in one of the largest invasions ever … it was the beginning of the end of WWII and many lives were lost. Freedom has a price and we must remember these events from our past. The Shores of Normandy, by Jim Radford is a song/video I watch frequently as a reminder of where we have been so that we do not go there again. This video has a lot of images from that day … many of us had family members who fought there.

Have a beautiful day … great others with a smile today … smiles are contagious in a good way.

Therefore be at peace with God, whatever you
conceive Him to be. And whatever your labors
and aspirations, in the noisy confusion of life, keep
peace in your soul. With all its sham, drudgery
and broken dreams, it is still a beautiful world.
Be cheerful. Strive to be happy.
excerpt from Desiderata by Max Ehrmann