… last night I was musing about how all creatures continue to evolve, learn, change and adopt. The Zone Tail hawk is no exception … I got this shot of one this morning thanks to a friend who called and said there was one in the neighborhood … I skipped my espresso, grabbed a camera and headed out the door … what a treat. 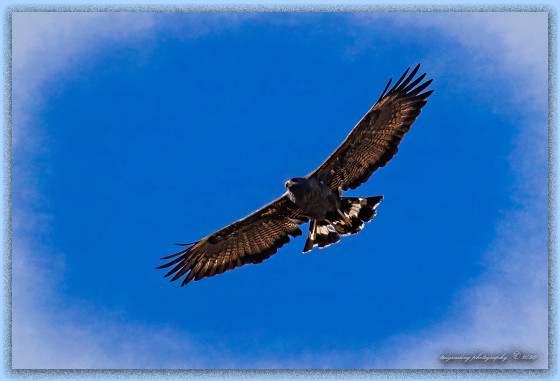 If you look at the primary feathers of the wing you will see how similar they are to a Turkey Vulture and for small eyes looking up from the ground it gives that appearance, especially when a Zone Tail is flying with the vultures. Over the millennia creatures on the ground have learned that Turkey Vultures do not eat live prey and since they are not a threat, they go on with their normal business, not worrying about the vultures overhead. The Zone Tail hawk has also evolved and the wing tips and flight characteristics fits right in with the vultures. With the prey effectively disarmed and sensing no danger, the Zone Tail has pretty easy pickings of its food choice. In addition to the primary feathers you can distinguish the Zone Tail from the Black Hawk by its tail having multiple white bands … The Black Hawk only has one.

Good progress on the ring today and diving into it in the morning … may have it finished by Monday and will send out progress photos.

One of my favorite soaring videos and a finish with some great aerobatics: https://www.youtube.com/watch?v=bUWjvhmOrUg

Have a beautiful day and smile … we are alive … back Monday morning.

I push back history, dismiss interpreters, and stand
erect before the dawn, looking the universe in the face,
and asking my own questions.
— Max Ehrmann