… there is beauty and there is life. We headed down to Watson Lake this afternoon, in and between, some fantastic monsoonal storms … after checking the weather radar apps we headed out on the lake, somewhat confident that we would be remaining between several large storms that were traversing the area. Lots of wind and stormy skies and not a lot of sun except for some rays that occasionally poked through. The wildlife was a little uneasy too and spooked sooner than on previous trips, but we still managed to get pretty much full frame shots of them. 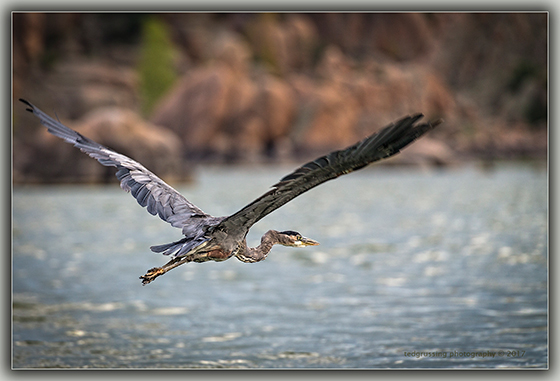 I got this shot of a Great Blue Heron just after he took off from a rock we were approaching; I was shooting into the light and the reflections from the water gave an almost metallic appearance to him. A lot of the areas we are shooting are completely inaccessible by land and “Knot Yacht” is proving to be an amazing tool in getting the kind of wildlife shots I like to shoot. After about an hour on the lake our apps were still showing the nasty stuff passing either side of us, but the lightning and heavy rain was not that far from us so we decided to err on the side of caution, went back to the dock and hung out for a while until lightning strikes became frequent and close. I’ve got the retrieval of the boat down pretty good now, so in just a few minutes the boat was on the trailer and we were heading back down the highway towards home.

Have a beautiful day and share a smile with someone today

And lastly give sweet sleep
Closed sight, no fright
That fears will o’er me creep;
And now a last goodnight.
— Max Ehrmann