Today’s Photo from Ted Grussing Photography: Eagles and Other Raptors

Sedona News – I’m going to spend this week featuring some of my personal favorites in various categories that I shot or processed in 2021 and we’ll begin the week with eagles and other raptors … winged predators including bald eagles which are apex predators and other hawks and falcons. The two featured photos are of juvi bald eagles that I shot at Lake Pleasant this year, bald eagles do not get the white heads and tail feathers until they are about five years old … links will take you to other photos of eagles, hawks and falcons that I shot this year and consider them worthy of hanging in my house … oh that I had any wall space left … with 73 windows in the house, internal wall space is a little limited.

The top bald eagle is a juvi that is just leaving his perch on top of a rocky ridge overlooking the lake. This shot was taken just as his talons were leaving the perch and he is reaching for a very powerful second wing beat as he enters flight.

The lower shot shows another view of a juvi leaving a similar perch three months after the first shot and in this shot he is just midway through his first wing beat and leap … talons are ready to lift off and all the flight feathers there to behold … might be the same eagle, do not know as there were three juveniles that we saw during the year. 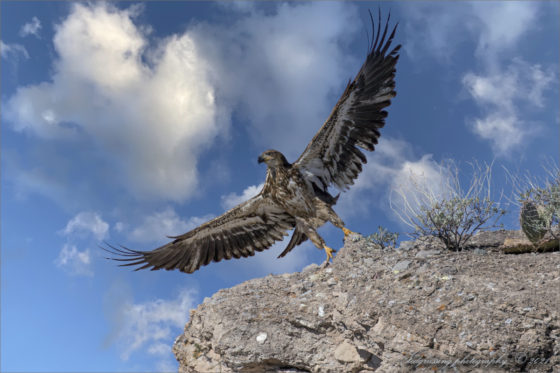 For sailplanes we used a zigzag tape placed on the upper surface of the wing just ahead of the air flow separation point to lift and re-adhere the airflow to the wing and achieved increased performance as a result. To find the separation point we would spread oil on the wing, go fly and after landing you could see where the airflow separated from the wing and then place the zigzag/turbulator tape just in front of that … I only did that a couple of times because it is pretty messy. The article is quite fascinating and I hope you will take the time to give it a quick read.

Here are a few more raptors that you may remember and are among my favorites for the year.

I hope that your day was beautiful … tomorrow will be devoted to replying to the many emails I have received, but not yet answered … I do try and your patience is appreciated. Also time to fix a small leak I have picked up in Knot Yacht … something about unexpected rocky sand bars just inches below the surface. The propeller looks like it has been through a war zone … such is the result of using it to drive through mere inches of water before you realize you have run out of water.

Smile, we are still here and life is a joy … the friendship of humans and critters and all of nature.
Cheers,
Ted
Whatever else you do or forbear
impose upon yourself the task of happiness;
and now and then abandon yourself
to the joy of laughter.
excerpt from whatever else You Do by Max Ehrmann