… last Thursday was a day down at the lake where not everything went as planned … the rains had washed a great deal of mud and stuff into the water and the water was anything but clear. On our first trip up Castle Hot Springs Bay, the water was especially turbid and near the very upper end, it fouled the water intake on the engine … time for paddles to come out. We paddled over a mile back towards the boat launch ramp when some very nice people threw us a line and towed us back to the ramp … thank you Justin of Pro Bass Adventures.

Time on the phone with the good people at Arizona Marine and Eliminator Boats to try and solve the issues, but the problem was greater than users could fix, so one last ditch effort to save the day with a stop at Pleasant Harbor Marina on the SE end of the lake … they were kind enough to take the time to disassemble the shaft and correct the problem … by this time my friends were saying to just forget it and make the trip home to Sedona … I suggested we stay as I wanted to get the eagles again … besides, my boat, my car and reluctantly they agreed and we launched again near mid afternoon … sped over to the far side of the lake and had some limited success … coming out of one narrow bay the world became an especially nice place for three photographers to be … An adult male Bald Eagle had just launched an attack on a coot.

The photo above shows the eagle as he rolls over into a dive and attack on the coot … the dive was straight down from about a hundred feet. He nailed the coot and spent several minutes in the water trying to secure the coot to carry him back to the nest and the photo below shows him taking off with the coot held by his talons … the coot managed to escape as the eagle took to the air and several more minutes were spent in repeated dives trying to regain control over the coot, but to no avail. The coot was looking up and every time the eagle dove the coot dove too. The eagle took a break and perched in a tree by the shore … the coot was gravely wounded and no doubt was later collected by the eagle … they can spot a rabbit from three miles … a coot a couple of hundred yards away in the water is a no brainer. We left the scene and all were ecstatic over the good fortune we had … I even got two Haagen Dazs ice cream bars on the way home! 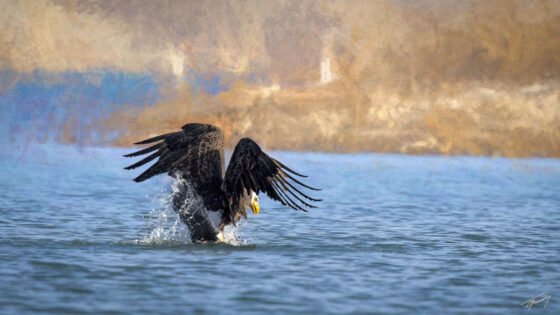 Thanks too all who saved the day and had we not returned to the water we would not have got these shots, nor would we have known what we had missed … go with your instincts!

Another amazing week underway … have a beautiful day and thanks for being here!

Forbid that I should judge others
lest I condemn myself.
Let me not follow the clamor of
the world, but walk calmly
in my path. Give me a few friends
who will love me for what
I am; and keep ever burning
before my vagrant steps
the kindly light of hope.

excerpt from Prayer by Max Ehrmann