Although I know that the critters I love cannot add additional layers, all those beautiful feathers trap a lot of body heat which hopefully gets them through the night so that the morning will find them breathing too. On the way down to 34F tonight and 12F by Wednesday morning … no flying this week. Listening to Nicholas Gunn’s Afternoon in Sedona, a favorite of mine. 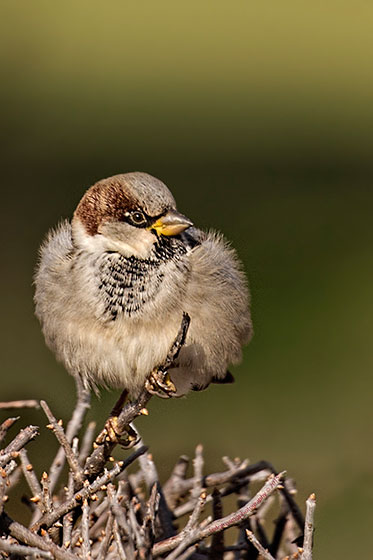 I shot this little guy in one of our wild olive trees a couple of days ago when One and I were out and about. I have never seen a tree more self-entangled than these trees; the birds love them as they provide terrific shelter from predators who would otherwise pick them off at will. I like sparrows and nearly got some great photos of them in flight this weekend … like most small birds they do not sit in one place all that long so the opportunities are abundant. The ones I almost got would have equaled nearly any other songbird I have shot … just that darn almost focus thing … smiles.

Sometime early next year I hope to have another motorhome in addition to the Zodiac boat. This one will be a bit smaller than the one I had custom made for Corky in 2000 and which we used extensively until 2007. One and I and the boat will be hitting the road in search of! A new journal will be logged and I think it will be titled “The Journeys of TAO”. Has a nice ring to it! Time along the coast, in National Parks, the great lakes and wherever the road and a whim takes us. A new super computer and other electronics will be needed and I’m looking forward to the adventure. Updated all four computers to the latest rev of Win 10 this weekend and if they still had service packs that is what it would be termed. Win 10 is without question the best roll out that Microsoft has had and has been a very stable platform for me.

I spent some time going through old emails tonight searching for the time when I began to use quotes to end my emails and in particular from Max Ehrmann. I always had Desiderata on my desk and at home, but with attribution to Anon; prior to my heart attack in January 2009 I was the sole caregiver for Corky, but after that our girls insisted that I get some help and one of the caregivers informed me that Max Ehrmann was the author. I set about reading and buying all of his works, Jogi gave me a first edition of his “Breaking Home Ties” and I spent time researching his life and liked everything I learned. So anyhow, this is the first quote I used in an email and it went out June 1, 2009 and I have been using quotes, mostly from Max, ever since. I have been doing the email to a list with photos since 2001 … had about 50 people on it to start and something in the order of 1800 now, plus the blogs on https://sedona.biz and the Verde Independent at  http://verdenews.com/main.asp?SectionID=322&SubSectionID=2719 which both get a large readership. Anyhow it is fun … life is too!

Have a beautiful day … make extensive use of smiles to give you an inner warmth and glow … keep the furnace going too as it makes the smiles easier to do :+)

You are a child of the universe, no less than the trees and the stars; you have a right to be here. And whether or not it is clear to you, no doubt the universe is unfolding as it should
— Max Ehrmann