… frogs make for great shooting when nothing else is available and such was the day went I took this shot. They hang out at the ponds patiently waiting for food to come by and are pretty cool creatures. There is so much life on this planet and all life forms find a way to survive or not … species extinction is as natural an event as is discovery and evolvement of new species. Hiccups of the planet (try earthquakes and volcanic eruptions) or errant rocks from space striking the surface can and do cause such events. Thankful for the ones in the past which wiped out species that would probably have kept us living in caves and hiding from them. I love this place … it is unpredictable and cares not a whit whether we are here or not and someday in the natural course of events it will burp and we will be gone as have so many other species over the billions of years earth has existed. Best to enjoy the day and the daily gift of life. 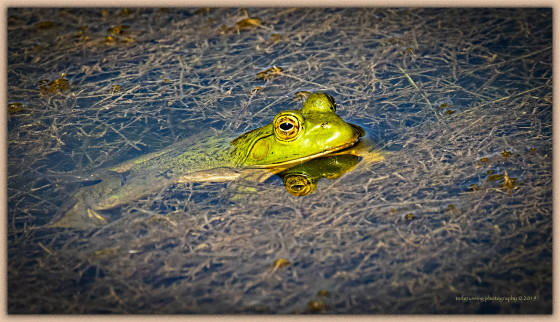 I got a notice for comment from the 4FRI today and will send that out tomorrow evening after I have had a chance to read it; a cursory look at it seems to indicate there is a choice as to how many hundreds of thousands of acres to burn and treat mechanically. Neither option seems attractive on the surface.

The majority of people I heard from favor individual emails and or letters to the entities and individuals responsible for and backing this continuing use of fire and resulting smoke as preferred treatment options. Anyhow, more on the subject tomorrow evening.

Have a beautiful day and keep smiling … breathing helps too.

“The rights of every man are diminished when the rights of one man are threatened.”
— John F. Kennedy