… I started shooting waterfowl when I was twelve and my Dad gave me my first shotgun, a Harrington Richardson, single shot .410 that took 2.5 inch shells and it was a folding gun with a relatively short barrel. I shot my first pheasant, duck and upland game with that gun. My Dad taught us a lot about life and nature and the respect that was owing to every living creature including the game we shot; we cleaned our kills, and we ate what we shot. Sometime in my twenties I decided that I had learned the lessons I needed to learn and found myself enjoying the hunt with a camera instead of a gun although from time to time I went on hunting trips with my brother and friends, but I also began to prefer to eat that which I bought in butcher shops to that which I shot … and somewhere in there I began to continue my hunting with a camera instead of the shotgun … I could shoot the same bird or game time after time and we would both end up ready to do it another day. 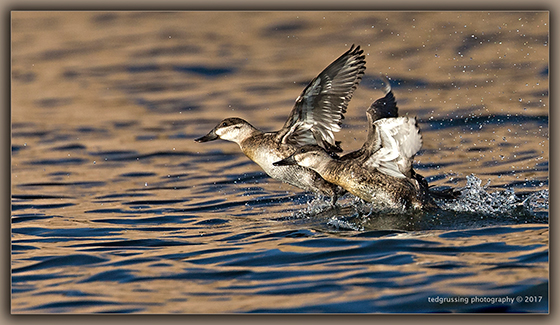 I belong to Ducks Unlimited and the support of hunters to this and other organizations do an amazing job in protecting and expanding the habitat for waterfowl and other game birds … if you’re going to shoot them with gun or camera you need to support organizations like DU that make your shooting possible, or just being out there enjoying the beauty of nature. These are people know how to manage habitat and they are private sector and rely on donations!

This is a shot of a pair of Surf Scoters that I got on Watson Lake this afternoon … they are delightful creatures and have that built in smile; even if they would like to flip me off for disturbing them, they are compelled to have a smile … maybe they’re just saying, “look what we can do”, anyhow, it was fun. 985 shots now reduced to 456 and some tough decisions need to be made in deleting another 200 shots or so. Mostly what is left is really good, so it is going to be decided by wing positions I like and such.

Come you who are weary, and sit in the shadow of my faith; and when you are rested we shall
journey together, singing gleefully on the highway, lending many a hand, yet passing ever on and on;
and at nightfall, tired and content, we shall light the candles in the house of love, thank God in cheerful
words, and lie down to peaceful sleep.
— Max Ehrmann