… spent most of the morning around the house catching up on some stuff and after having breakfast at 1:30P (never fear, 6 shots of espresso by 8:30AM) I decided to get out of here for the afternoon. Since the photos I took yesterday morning showed the prescribed fires SSE of Mormon Lake and well S of Lake Mary, and given that the winds were from the NE to ENE carrying the smoke down our way I concluded that Lake Mary, would be a good place to spend a few hours … so, at 2:00P I was hooked up and on the road. 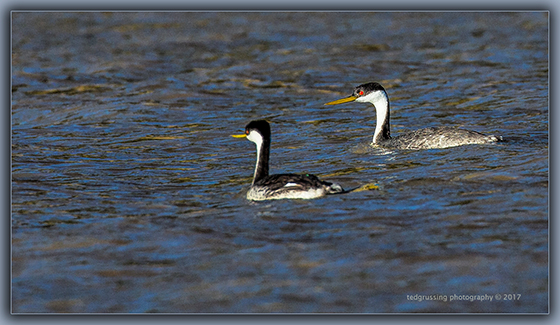 I was the only boat, save one kayak, on the Lake, the air was clear and the breeze refreshing. The water was quite muddy and visibility downwards only a few inches, so I was really glad to have my Garmin 7” Sonar, GPS device along. There was not a lot of wild life on the lake, but I did see quite a few Grebes, Red Head Ducks, Rudy ducks, Ringneck ducks and a few others. Mostly it was just about exploring the far east end of the lake beyond the buoy line. Without the Garmin I would have been hesitant about going into potentially shallow water that lacked visibility, but cruised all the way up and only a short distance where it got shallow … 2.6 feet, otherwise mostly 7 feet or more.

It brought back a lot of memories of being on the lakes in northern Wisconsin and Minnesota when Corky and I lived there, the beautiful Ponderosa Pine forest and the fresh wind blowing from the NE. Turned the engine off for a while and just drifted listening to the silence, the water slapping the sides of the boat and no one anywhere around me. Late afternoon I did the boat recovery and headed home.

Coming down the rim from Flagstaff the sunset was absolutely beautiful with the sun setting and all the smoke in the air it was a beautiful, albeit, deadly, sunset. Winds are continuing from the NE and I fully expect that the USFS will do their burns anyhow …  good for the health care business though!

Another beautiful day underway and it will be good … share a smile with someone today.

For a few hours here in the still morning I wash myself clean of civilization, and purge myself of things and the accumulated rubbish of time.
I push back history, dismiss interpreters, and stand erect before the dawn, looking the universe in the face, and asking my own questions.
Tomorrow I shall return to the human wheels; but now I defy the world of customs and laws, of sophistry and serfdom; and I yield myself childlike
to the light and the air and the sweet scented dew.
— Max Ehrmann