Today’s Photo from Ted Grussing Photography:
Around the corner …

… Christmas the day after today … 2015 the New Year a week later … mountains peeking through the clouds … a ski area … Mars Hill with Lowell Observatory a portal to the heavens… eternity something we are in the midst of where there are no “just around the corners”. What an adventure and what a life with so much to see just around the corner … the bend. 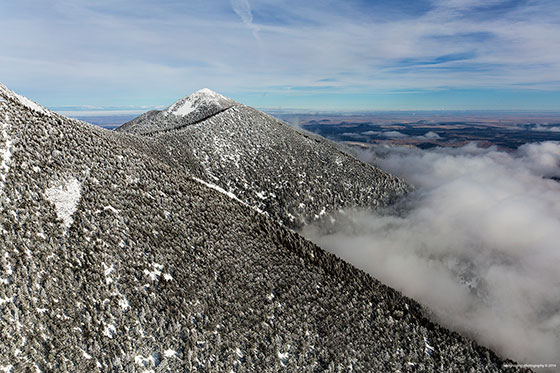 I took this shot last Friday on a flight to one of my favorite places to shoot; a fresh snow had fallen and the peaks were wreathed in clouds, part of the volcanic field opened through the clouds to the east. I used a 24mm focal length on this shot which gives me a much wider view of the landscape and as a result makes things look much farther away than they are … nice big trees on the mountain side :+) The near peak which takes up about forty percent of the image is Agassiz Peak which at 12,360’ is the second highest peak in Arizona and only 273’ lower than Humphreys Peak. Around the corner on the left is Snow Bowl which had a lot of skiers on the slopes when I was cruising the contours of the peaks taking photos.  Beyond Agassiz Peak, the near peak is Freemont Peak and the far peak is Doyle both in the 11,400-900’+ range.  Tops of the clouds were a little below 11,000’ … it was just one of those truly fun days to play in the sky and among the peaks.  Doyle was named Shultz through the 1930’s and the west ridge of Fremont was Doyle … and there is a lot of confusion on naming … a discussion can be found at http://en.wikipedia.org/wiki/Doyle_Peak

Tomorrow some house painting … didn’t get around to it today and just got home from Phoenix a while ago. Fun time with friends and some beautiful jewelry projects completed which will make for smiles on the 25th :+)

As humans we need timelines as we are finite and like to mark certain special days which repeat each time the earth completes a revolution around our star the sun … I like the thought of eternity, the continuum where we simply are … no rush to buy Christmas presents or need to because the gift is given for all of time … it simply is.

Whatever your faith or your belief always celebrate it in love and with a peaceful heart. Embrace the faith journey and love those who journey life’s path … those who have gone before … those on the journey and those yet to embark on it. While circumstances for each of us differ, we all make our own choices on how to make the journey and how we perceive it. Choose the path that should be traveled.