Today’s Photo from Ted Grussing Photography: And then

… he saw me and rather than land at my feet this Great Blue Heron stopped his descent and wheeled up and to my right as he climbed out of there. In this photo he is still in landing mode and you can see the feathers on the back of his wings start to curl up as he increases his angle of attack as he is flaring for a landing. due to the increased angle of attack. This is one of the very rare times I have been able to get a shot of a GBH coming directly at me … fortunately the focal tracking in the 1DX MK III was up to the task and delivered some amazing shots. 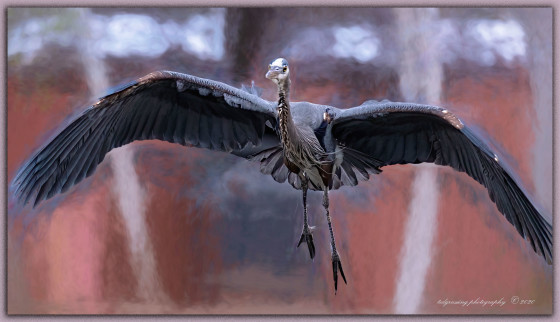 I brought some smoked trout home and had that with a salad for dinner … have to say that fresh smoked trout from there is absolutely delicious. Call Greg or Lydia at: (928) 282-5799 to make sure they have it in stock before you head up there. a real treat!!!

A beautiful day and expecting the same for tomorrow. The bird feeder project went nowhere and I may just end up throwing the seed on the ground. After espresso this morning I will begin carving the wax for the opal … it will be a knock out!

Way behind on responding to emails … sorry and will try to catch up again in the next few days.

Stay safe and smile … life is good and we are blessed.

Meditation, softened by the peaceful lands of grain and
the illimitable blue sea overhead, draws my heart to
my lips as one whose talent is in song.
— Max Ehrmann