… there were many days when I would get out to the airport early, takeoff and head up to the plateau to get my aerial shots and then head back to Sedona, land and head back up there to get shots of the same areas, but from the ground. The photos tonight are from one of those days in early October. The aspens were in near peak color and the clouds were absolutely amazing … a little cloudier in the morning, but lifted and more blue sky in the afternoon.

The shot above was taken from the southwest of the San Francisco Peaks at an altitude of 10,814 feet, about 1500 feet above the parking lot at Snow Bowl … the parking lot and chalets are located just left of center of the photograph and the ski runs are above and to the right. The peak on the right is Agassiz and on the left Humphreys Peak.. In the lower right corner, just left of my signature is the road up to the ski area and there are cars on it.

After landing I headed up 89A through Oak Creek Canyon and the photograph below was taken from Snowbowl parking lot looking to the northwest and the peak you are looking at is Kendrick peak which at 10,425 feet is one of the highest peaks in Arizona. Like all the other mountains on the Colorado Plateau, it is of volcanic origin too. It last erupted about 1.4 million years ago. The most recent eruption in the field was Sunset Crater east of the San Francisco Peaks and erupted a mere 950 years ago. 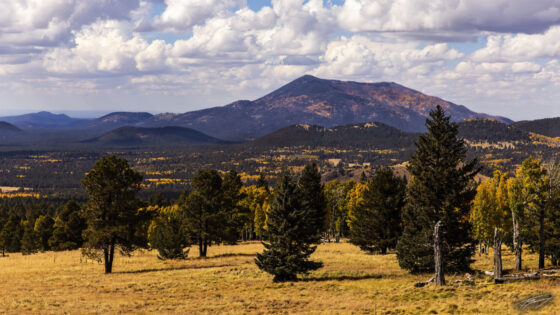 Earth is constantly in an active state of change, it is just that with short life spans things seem like they are static … they are not. The San Francisco Volcanic Field began with the volcanic origins of Bill Williams Mountain about 3.5 million years ago and in the intervening years, more than 600 volcanic cones/mountains have been formed … earth is not done and continues to evolve in its own time … we’re just kind of along for the ride and what an incredible ride it is!

Have a beautiful day and if you are able, please join me at the Mary Fisher Theater, Friday night at 7PM or Saturday at 4PM. Michele will be giving a short presentation with Leroy the Harris’s hawk prior to the start of the show and then we’re on the way.

I drink deep the joy of dawn, and peace abides with me;
And though I know that I again shall see
Dark fear with withered hand approach my sleep,
More sure am I when lonely night shall flee,
At dawn the sun will bring good cheer to me.
excerpt from The Dawn by Max Ehrmann