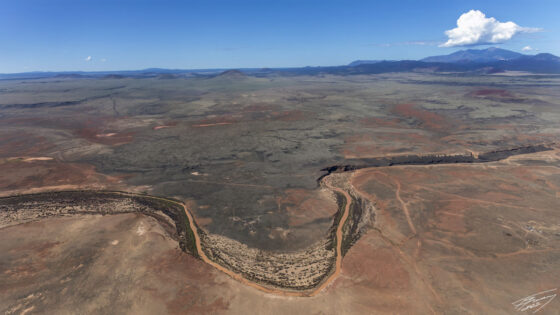 … you are looking out across a large portion of the San Francisco Volcanic Field … the new portion and it includes a large part of the Painted Desert. The river which cuts across the photo flowing from left to right, is the Little Colorado River and what is remarkable about what you are looking at is the sudden turn to the north and the return to the south … what happened? About 20,000 years ago, Merriam Crater erupted sending a lava flow about 12 miles north and in the process it flowed across the Little Colorado River and dammed it up. This caused the river to flow around the lava flow and then return to the south where it met the lava flow again and made a right turn along the flow and continues its way to the Colorado River some 60 plus miles to the NW. Where it turns right again is also where it formed Grand Falls which is an amazing place and in addition to being a muddy falls, at 185 feet, it is also about 4 feet higher than Niagara Falls. You can see how muddy the water is … the river flows north out of the White Mountains and picks up the mud as it passes through the Painted Desert.

Miriam Crater can be seen above and slightly left of the curve in the river … you can also follow the lava flow up to it. On the right side of the photo and above the Little Colorado River is a reddish volcanic cone and that is Roden Crater the 40 plus year art project of James Turrell. Under the cloud in the upper right are the San Francisco Peaks, the only Composite (strato) volcano in the San Francisco Volcanic Field; it began forming about 1.8 million years ago and had a catastrophic eruption about 400,000 years ago blowing about 4,000 feet off the top … to the left of it is Mt. Elden … a lot of history here and a lot going on today as earth and everything on it continues to undergo change … in its own time.

Below is a forgotten image that I took years ago of a Scrub Jay … he has an inquisitive look on his face and they contribute to the beauty of life in the neighborhood. Forgotten no more. 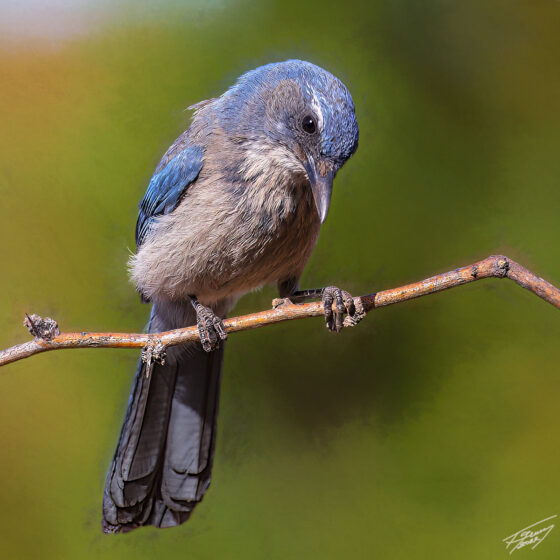 Off on a field trip in the morning to shoot wild flowers, abandoned buildings and if we get lucky a herd of wild horses … thanks to a friend who told me about them … hopefully they are still there.

Have a beautiful day and enjoy the weekend … like why would you choose not to? It is always our choice as to how the day goes … choose joy!

Back Monday, at least that is the plan.

The sky seems very near, and the stars lie over the
heavens like fields of daisies stretching on and on.

All silent, the universe is doing its work—beautiful,
mysterious, religious!

excerpt from A Few Hours Ago by Max Ehrmann