The Richness of Cultural Judaism

Sedona AZ (March 4, 2017) – How is it possible to be a “secular Jew”?  Many people are culturally Jewish and identify strongly as Jewish but do not call themselves “religious.”  A three-part series exploring cultural, enriching aspects of Judaism, based on Edgar Bronfman’s recent book, “Why Be Jewish” will be offered by the Jewish Community of Sedona and the Verde Valley, and facilitated by Paul Friedman, Ph.D. The classes will be held at the JCSVV on three Thursdays: March 9, April 6, and May 4, at 1:30 pm. 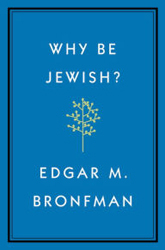 Edgar J. Bronfman, heir to the Seagram Company fortune, found his life’s greatest rewards by exploring his Jewish heritage, and discussing this in his last book, Why Be Jewish? completed shortly before he died in 2013, at age 84.   Although he had spurned religious practice throughout most of his adult life, at age 60, “he began a journey through the deep, rich, and fascinating world of Judaism.”  He examined the Hebrew Bible, the Talmud, rabbinic commentaries, philosophical writing, and modern interpretations.

He remained an atheist, but found, nevertheless, that “Judaism remains an immensely rich enterprise.”  Put another way, Bronfman never fell in love with God, but he fell in love with being Jewish.  Describing himself as a “cultural Jew,” he discovered much that is wonderful in the teachings and traditions of Judaism.

Learn what moved him so much in an upcoming three-session class “The Richness of Cultural Judaism,” beginning on Thursday, March 9th at 1:30 pm at the JCSVV, facilitated by Paul Friedman, Ph.D.  This class will explore, in an informal, open-minded, stimulating way, the elements of Judaism that he found so personally enriching, and sharing by the participants their own journeys of identity.