The Orphan Trains – Foundlings on the Frontier

Camp Verde AZ (January 10, 2019) – Join us in the Terracotta Room at Camp Verde Community Library at 6:00 pm on Tuesday, January 22nd for free presentation of the program “The Orphan Trains – Foundlings on the Frontier.”

The Arizona Humanities Council has funded a 4-city tour of the multi-media program “Riders on the Orphan Train – Foundlings on the Frontier” in January and February, 2019. Public libraries in Clifton, Globe, Camp Verde, and Coolidge are the selected sites.

Few people today know much about the largest child migration in history. Between 1854 and 1929 over 250,000 orphans and unwanted children were taken out of New York City and sent west to find new homes. Children were sent to every state in the continental United States; the last train went to Sulphur Springs, Texas in 1929. In 1904 a group of twenty-one Irish Catholic children came to Clifton, Arizona from the New York Foundling Hospital and the ensuring confrontation over stewardship of these children became a state and national controversy that went to the Arizona Supreme Court. This incident in racial and class conflict is a poignant illustration of the cultural disparities between the East Coast and the developing West at the turn of the last century. A non-fiction book, “The Great Arizona Orphan Abduction” by Linda Gordon and published by Harvard University Press chronicles this historical event. 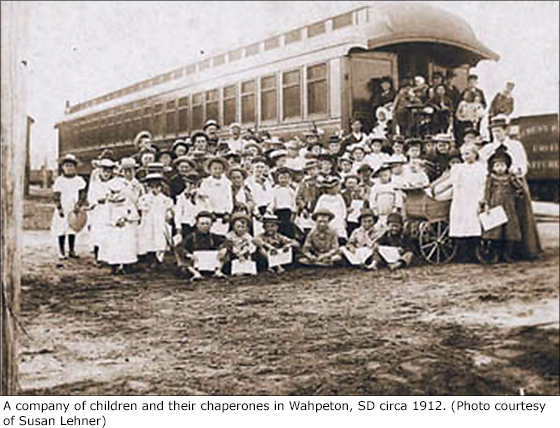 This “placing out” system was originally organized by Methodist minister Charles Loring Brace and the Children’s Aid Society of New York. His mission was to rid the streets and overcrowded orphanages of homeless children and provide them with an opportunity to find new homes. Many of the children were not orphans but “surrendered” by single parents too impoverished to keep them. The New York Foundling Hospital, a Catholic organization, also sent out children to be placed in Catholic homes. This seventy-six year experiment in child relocation is filled with the entire spectrum of human emotion and reveals a great deal about the successes and failures of the American Dream.

The one-hour multi- media program Riders on the Orphan Train combines live music by Phillip Lancaster and Alison Moore, video montage with archival photographs and interviews of survivors, and a dramatic reading from the 2012 novel “Riders on the Orphan Train” by award-winning author Alison Moore. Especially featured will be a recounting of the Clifton, AZ controversy.

Although the program is about children, it is designed to engage audiences of all ages and to inform, inspire and raise awareness about this little-known part of history. The presentation was originally developed as an outreach program for The Orphan Train Heritage Society of America, Inc. and is currently the official outreach program for the National Orphan Train Complex Museum and Research Center in Concordia, KS. Twenty years of touring have provided the presenters with many true stories of Orphan Train Riders and their descendants.

Local relatives and acquaintances of Orphan Train Riders are especially invited to attend and share their stories with the audience. 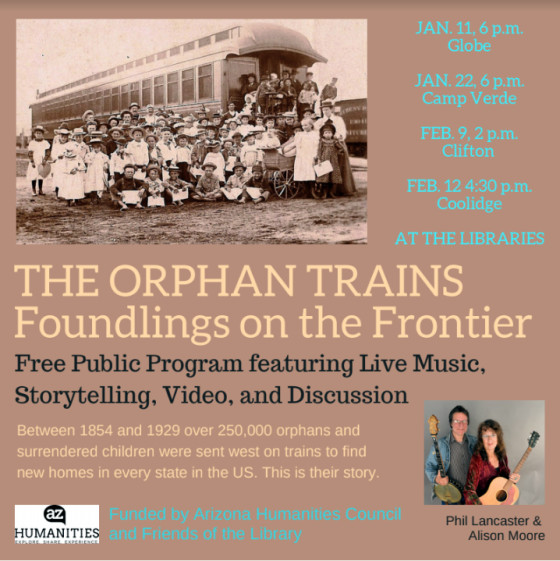 Alison Moore, MFA, is a former Assistant Professor of English/Creative Writing in the MFA Creative Writing Program at the University of Arizona and a current Humanities Scholar in Texas. She lives in Austin and completed the novel “Riders on the Orphan Train” with a fiction fellowship from the National Endowment for the Arts and a grant from the Texas Institute of Letters and the Dobie/Paisano Foundation of the University of Texas at Austin. She is the author of three other books, a  collection of short stories entitled “The Middle of Elsewhere” (Phoenix International/University of Arkansas Press 2006), a novel, “Synonym for Love” (Penguin/Plume, 1996) and the short fiction collection “Small Spaces between Emergencies” (Mercury House, 1992), one of the Notable Books of 1993 chosen by The American Library Association. In 2012 she received the Charles Loring Brace Award for her work in preserving Orphan Train history.

Phil Lancaster was born in Texarkana and studied art and music at L’Ecole De Beaux Arts in Angers, France. He became a member of a bluegrass band that traveled and played throughout France and produced an album entitled “Bluegrass Oldies Ltd./Traveling Show.” He also worked as a stage theatre technician for La Coursive Theatre Nationale in La Rochelle, France. After returning to the U.S. he met three

Arkansas musicians and the acoustic quartet “Still on the Hill” was formed in Fayetteville. They released their first CD in 1997, the second in 2000. The group performed at national and international festivals. In 2007 he received an Arkansas Arts Council fellowship for Music Composition. He currently lives in Austin and is a co-presenter of “Riders on the Orphan Train.” He also tours in France with musician Phillipe Charlot in the duo “Trans-Atlantique.”

In 2012 he received the Charles Loring Brace Award for his work in preserving Orphan Train history.

“…the program far exceeded any expectations I may have had, as did the community’s response…this was by far the most well-attended program the library has ever offered….everyone who attended was moved, educated and entertained…your program truly made an impact on our community.”
–Cecilia Hurt Barham, Decatur Public Library, Decatur, TX

Camp Verde Community Library is located at 130 Black Bridge Rd. Camp Verde, AZ.  For more information about this or any other program in the library, call (928) 554-8391.