The MENding Monologues stages a “theatrepeutic” experience for audiences

Sedona, AZ (September 23, 2011) – Inspired by The Vagina Monologues, The MENding Monologues performs on Friday, Oct 7 at 7 PM for their last local performance of the year. Tickets are $10 advance or $12 the night of the show. This show is likely to sell out, so please purchase your tickets early. 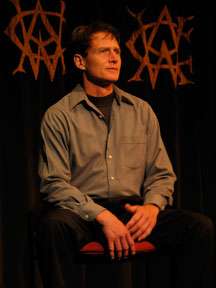 Written and performed by Sedona residents Derek Dujardin, Bonnie Green and Dev Galloway, the MENding Monologues is a smart mix of heart-centered monologues, comic sketches and slam poetry that takes the audience on an emotional rollercoaster ride through relationship issues and gender wounds to arrive at love and understanding.

“Everyone was completely smitten by the performances,” said Tracy Hartnett, Coordinator for Domestic Violence Treatment in Alberta Canada. “People came back to see it a second night because they were so moved.”

“The traveling version of show, script and cast has evolved and will continue to evolve,” said Dujardin. “New voices and creativity continue to infuse what we do with fresh expression.”

“We are very proud of the caliber of the work and how it touches the hearts and minds of our audiences,” said Bonnie Green, the MENding’s business manager and co-producer.

Slam poet Ed Mabrey will join the MENding Friday night. Ed is the winner of 2008-2009 Grand Slam World Poetry Championship and founder of the Black Pearls of Poetry in Phoenix.

Partial proceeds from the show will benefit the Prescott chapter of Boys To Men. Using ancient rites of passage and mentoring, Boys to Men initiates young men into the world of healthy masculinity.

“I think the main message of the show is that there is gift next to the wound and that the scars will make you more human if you let them,” said Derek Dujardin, performer.