Sedona AZ (March 10, 2017) – Sedona International Film Festival presents the new season of the Exhibition on Screen series with “The Curious World of Hieronymus Bosch”. The event will show in Sedona on Monday, March 20 at 4 and 7 p.m. at the festival’s Mary D. Fisher Theatre. This is the first in a series of four featured programs.

Exhibition on Screen’s newest film — “The Curious World of Hieronymus Bosch” — lets viewers explore the once-in-a-lifetime exhibition which brought Hieronymus Bosch masterpieces from around the world back to his hometown in the Netherlands. 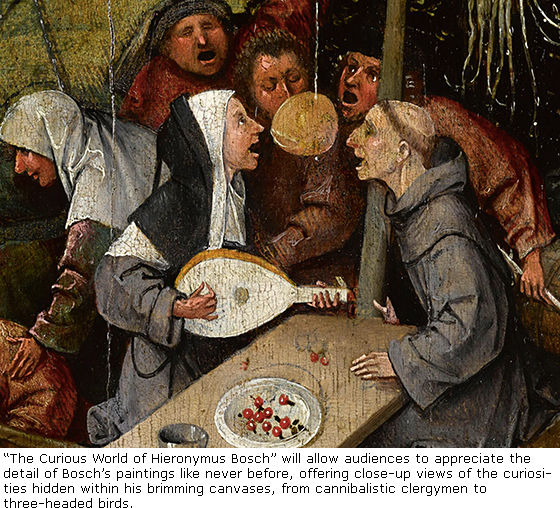 Hieronymus Bosch – Visions of Genius at the Het Noordbrabants Museum was the largest ever Bosch retrospective, bringing 36 of his 44 surviving works together in Den Bosch. The exhibition took a radical approach, offering research and conservation expertise in exchange for loans from the world’s best museums. Over 420,000 people flocked to the exhibition to marvel at Bosch’s curious creations.

Now worldwide audiences can enjoy a front row seat to Bosch’s extraordinary homecoming. Accompanied by expert insights from the exhibition’s curators and leading cultural critics, the film delves into the life of the visionary artist to explore the inspiration behind his strange and haunting works. Contributors include maverick filmmaker and artist Peter Greenaway, The Times’ Chief Art Critic Rachel Campbell-Johnston, and Director of the Het Noordbrabants Museum Dr. Charles de Mooij.

“The Curious World of Hieronymus Bosch” will allow audiences to appreciate the detail of Bosch’s paintings like never before, offering close-up views of the curiosities hidden within his brimming canvases, from cannibalistic clergymen to three-headed birds.

The film brings to life the original form of Bosch’s famous altarpieces, which have long been separated and are now divided between the world’s great museums. It also reveals new discoveries made by the Bosch Research and Conservation Project during preparations for the exhibition, using cutting-edge technology to uncover yet further layers to Bosch’s multifaceted paintings.

“The Curious World of Hieronymus Bosch” has been chosen by the city of Den Bosch to mark the culmination of Hieronymus Bosch 500, a year-long program of events to honor the 500th anniversary of the artist’s death. The film is a fitting end to these celebrations, transporting Bosch from his hometown out into cinemas around the world.

“The Curious World of Hieronymus Bosch” will be shown at the Mary D. Fisher Theatre on Monday, March 20 at 4 and 7 p.m. Tickets are $15, or $12.50 for Film Festival members. Tickets are available in advance at the Sedona International Film Festival office or by calling 928-282-1177 or online at www.SedonaFilmFestival.org. Both the theatre and film festival office are located at 2030 W. Hwy. 89A, in West Sedona.