Sedona AZ (June 2, 2017) – Sedona residents and visitors alike will have the unique opportunity to immerse themselves in the enchanting and beguiling world of hummingbirds during the Sedona Hummingbird Festival, July 28-30.  Presented by the International Hummingbird Society and held at the Sedona Performing Arts Center and various spots around Sedona, the Sixth Annual Sedona Hummingbird Festival will fascinate attendees with three enlightening days of presentations by renowned hummingbird experts, self-guided garden tours, exhibits, birding trips, and more.

The festival is scheduled to correspond with the large influx of hummingbirds that flutter through Sedona on their way to southern Mexico, where they spend the winter months.  During this time, Sedona’s hummingbird population swells exponentially, with up to seven different species present as opposed to the two species that typically inhabit the area.  In the months leading up to this migratory event, the residents and businesses of Sedona are encouraged to plant “hummer-friendly” flowers or place feeders on their properties.  The result has been an increasingly higher number of hummingbirds visiting Sedona year after year.  Based upon nectar consumption, some residents have estimated that they have been visited by between 500 and 2000 hummers a day! 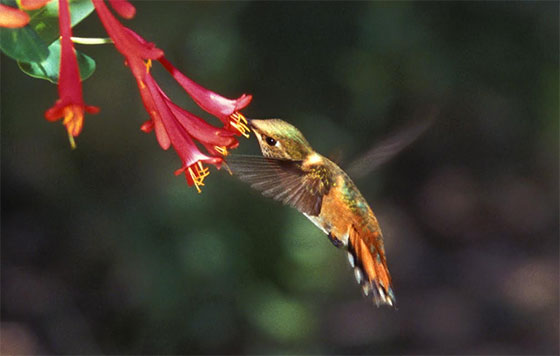 The main highlight of the festival will be a series of presentations by internationally recognized hummingbird experts.  With over 75 percent of the content devoted to hummingbirds, the presentations will educate attendees about a variety of subjects related to these mesmerizing creatures.  This year, the speaker’s platform will feature co-headliners James Currie and Victor Emanuel.

James Currie is fast becoming the most recognizable face in birding and wildlife in North America.  James hosts the popular birding TV show, Nikon’s Birding Adventures, on NBC Sports Network, now in its sixth season.  He also hosts the popular action-birding show Aerial Assassins on National Geographic, aired in the United States and worldwide in 2012.  He has led professional wildlife and birding tours for 18 years, and his passion for birding, adventure and remote cultures has taken him to nearly every corner of the globe.  His presentation, “Twenty Hummingbirds to See Before You Die!” will be held on Saturday afternoon at 4 p.m.

Victor Emanuel is the founder and compiler for 50 years of the record-breaking Freeport Christmas Bird Count, and served a term as president of the Texas Ornithological Society.  Birds and natural history have been a major focus throughout his life.  His travels have taken him to each continent, with his areas of concentration being Texas, Arizona, Mexico, Panama, and Peru. He derives great pleasure from seeing and hearing birds.  Victor is one of the most well-recognized names in the birding world.  His presentation, “Birds Have It All!” is at 1:30 p.m. on Saturday.

Among the festival’s most popular attractions are the Birds & Blooms Hummingbird Garden Tours, sponsored by Birds & Blooms magazine.  These self-guided tours allow attendees to meander through private gardens that have been identified as “hummingbird hotspots.”  Festival guests will also be able to enjoy several free events, including art exhibits and the opportunity to witness banding.  Banding refers to the process of marking hummingbirds with tiny, numbered anklets so that their movements may be scientifically tracked.

The Sedona Hummingbird Festival is sponsored by the International Hummingbird Society, a Sedona-based nonprofit organization dedicated to educating the public about hummingbirds and advancing conservation efforts for these captivating creatures.  This mission is in response to the fact that approximately ten percent of hummingbird species are at risk for extinction.  The festival offers attendees an opportunity to engage with the Hummingbird Society’s goals while experiencing gorgeous Sedona.  Surrounded by the awe-inspiring red rock formations that have made Sedona a popular destination for tourists from around the world, attendees will understand the inspiration for the festival’s theme: “The Most Beautiful Place in America to See Hummingbirds.”

The Sixth Annual Sedona Hummingbird Festival will take place July 28-30, 2017 at the Sedona Performing Arts Center (SPAC), located at 995 Upper Red Rock Loop Road, Sedona, Arizona 86336.  Tickets are available at the door or online at the Festival’s website:  http://www.hummingbirdsociety.org/hummingbird-festival.  For more information, contact The Hummingbird Festival at (800) 529-3699 or (928) 284-2251.