Sedona Film Festival presents
‘The Doctor from India’ May 10

Sedona AZ (April 30, 2018) – The Sedona International Film Festival is proud present a one-night only special premiere of the award-winning new documentary “The Doctor from India” on Thursday, May 10 at 4 and 7 p.m. at the Mary D. Fisher Theatre.

Meet the filmmaker — director Jeremy Frindel — who will be in Sedona to host the premiere and conduct a Q&A discussion after both screenings.

“The Doctor from India” is a meditative and immersive portrait of the life and work of Dr. Vasant Lad, the holistic health pioneer who first brought the ancient medical practice of Ayurveda from India to the west in the late 1970s. Integrating his gifts as both a healer and a mystic, Dr. Lad has dedicated his life to sharing what is considered the oldest healthcare system on earth in the complex medical landscape of the United States. 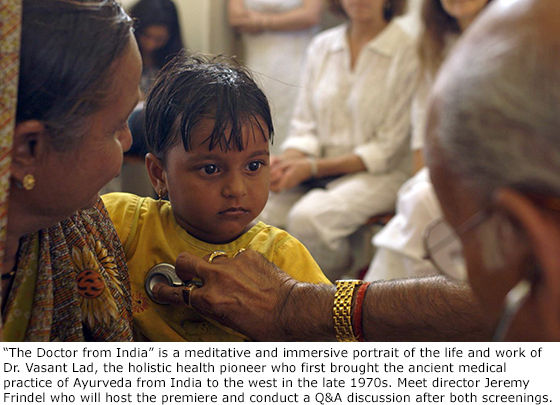 This is the beautiful and inspiring story of a man who has for decades been quietly at the center of a revolutionary movement to change the way we care for our bodies and our spirits.

Frindel documents the life and work of Dr. Vasant Lad who, fulfilling his destiny as foretold by his family guru became a holistic health pioneer, helping to bring Ayurveda, which was almost unknown when he first arrived in the west, to become one of the most prominent alternative health systems in the world today.

Jeremy Frindel is the founder of Substratum Films, and in 2013 released his first feature film, “One Track Heart: The Story of Krishna Das”. The film screened theatrically across the US, in festivals all over the world, and won the Best Documentary prize at many festivals. “The Doctor from India” is his second feature film. Raised in Kentucky, based in Brooklyn, he earned a BA in Film Scoring from the Berklee College of Music in 2001 and has been engaged in the many aspects of filmmaking ever since.

Meet Jeremy Frindel at this special premiere of “The Doctor from India” and enjoy a behind-the-scenes look at the documentary and the making of the film in the Q&A sessions following both screenings.

“The Doctor from India” will show at the Mary D. Fisher Theatre on Thursday, May 10 at 4 and 7 p.m. Tickets are $12, or $9 for Film Festival members. For tickets and more information, please call 928-282-1177. Both the theatre and film festival office are located at 2030 W. Hwy. 89A, in West Sedona. For more information, visit: www.SedonaFilmFestival.org.