Sedona AZ (March 27, 2018) – The Sedona International Film Festival is proud to join theaters around the world for a special one-night only premiere of “No Man’s Land Film Festival” on Thursday, April 5 at 4 and 7 p.m. at the Mary D. Fisher Theatre.

Kicking off their third year of operations, “No Man’s Land Film Festival” is breaking down national and international borders with their 2018 tour — aimed to become an international voice for women in adventure.

“No Man’s Land Film Festival” (NMLFF) is the premier all-female adventure film festival based out of the Rocky Mountains of Colorado and on tour internationally. NMLFF celebrates the full scope of female athletes and adventurers, looking to redefine what it means to identify as a woman in the outdoor industry. NMLFF champions women with grit, hustle, determination, and boundless passion, investing them with the respect, support, and media recognition they deserve. 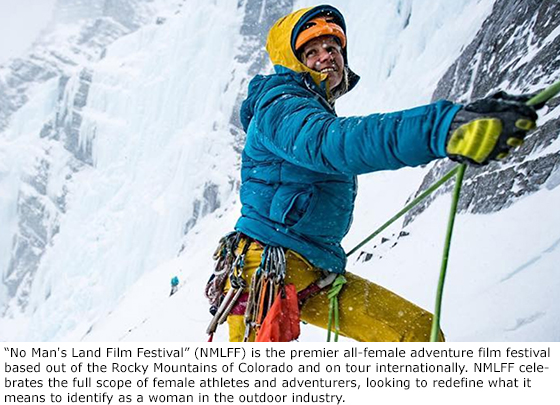 A collaboration of men and women, “No Man’s Land” strives to implement and inspire change in the outdoor industry, while cultivating a deep interest in exploring the vastness of our planet from a female point of view. The NMLFF mission transcends the films presented, acting as a platform for powerful and progressive movement in the outdoor industry.

“Bold, vibrant women are stepping into the outdoor industry with intrepid spirit and boundless drive and we aim to champion the women of outdoor and adventure sports, investing them with the respect, recognition and dignity they deserve,” says Aisha Weinhold, NMLFF Founder and Executive Director. “As a registered non-profit organization, NMLFF strives to empower and motivate audiences to implement and inspire change within the outdoor community. Our mission transcends the films presented; this festival acts as a platform for progressive thought and movement in the outdoor industry.”

Short films featured in the 2018 “No Man’s Land Film Festival” tour lineup include:

In their first year of operation, NMLFF sold out every screening — from the historic Crystal Palace in Aspen, Colorado to a gymnasium in Bishop, California. In their second year, NMLFF travelled to upwards of ten states and into Canada. In 2018, the “No Man’s Land” tour is looking to continue to grow and bring their mission of redefining feminine in adventure and sport through film to a global community.

“Having created a platform to engage women who are just beginning their journey in the outdoor and adventure realm as well as seasoned athletes, this year we are focusing on actively engaging with women in the outdoors beyond the screen,” says Weinhold.

“No Man’s Land Film Festival” will show at the Mary D. Fisher Theatre on Thursday, April 5 at 4 and 7 p.m. Tickets are $15 or $12.50 for Film Festival members. For tickets and more information, please call 928-282-1177. Both the theatre and film festival office are located at 2030 W. Hwy. 89A, in West Sedona. For more information, visit: www.SedonaFilmFestival.org.