Sedona AZ (April 21, 2016) – The Sedona International Film Festival is the official, exclusive Northern Arizona home for the New York Film Critics monthly series debuting new films weeks prior to their theatrical release. The series is hosted by Rolling Stone Magazine’s Peter Travers, via satellite, and features a Q&A with the filmmaker and stars from the film each month.

The May premiere event will feature the debut of “Mothers and Daughters” —  just in time for Mother’s Day week — for one show, one night only on Tuesday, May 3 at 7 p.m.

Peter Travers will host and introduce the film; and the film’s stars Selma Blair, Mira Sorvino and Ashanti and director Paul Duddridge will take part in a Q&A discussion following the screening via satellite. 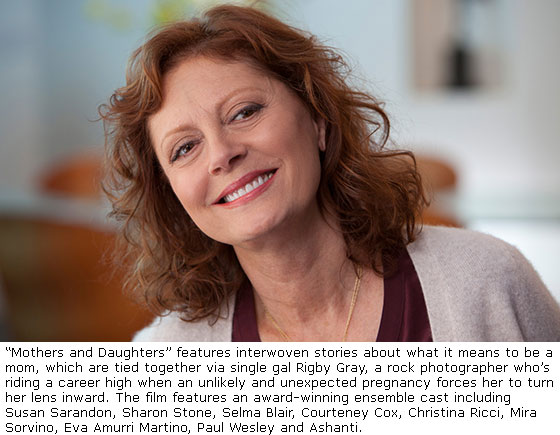 “Mothers and Daughters” features interwoven stories about what it means to be a mom, which are tied together via single gal Rigby Gray, a rock photographer who’s riding a career high when an unlikely and unexpected pregnancy forces her to turn her lens inward. As Rigby slowly comes to terms with what it might mean to change her life forever, she discovers with fresh eyes her own relationship with her estranged mother.

Through a series of photographs documenting motherhood in all its varieties, she considers what it means to be maternal at all. Director Paul Duddridge’s film is a celebration of the unparalleled love between mothers and their children and the myriad ways they connect in today’s modern world.

Join us for a special evening and sneak premiere of this new film, hosted by Peter Travers from Rolling Stone Magazine via satellite, and stay for the Q&A with the film’s stars Selma Blair, Mira Sorvino and Ashanti and director Paul Duddridge.

The New York Film Critics Series premiere of “Mothers and Daughters” will take place at the Mary D. Fisher Theatre one day only: Tuesday, May 3 at 7 p.m. All tickets are $12 for this exclusive premiere event. For tickets and more information, please call 928-282-1177. Both the theatre and film festival office are located at 2030 W. Hwy. 89A, in West Sedona. For more information, visit: www.SedonaFilmFestival.org.