Sedona AZ (November 14, 2017) – The Sedona International Film Festival is proud to present the Northern Arizona premiere of the romantic comedy “The Truth About Lies” showing Nov. 24-29 at the Mary D. Fisher Theatre.

If you need a good laugh to kick off the holiday season, “The Truth About Lies” is for you.

Gilby Smalls, a desperate, unemployed man who lives with his mother, weaves an ever-growing web of lies to impress a beautiful woman. 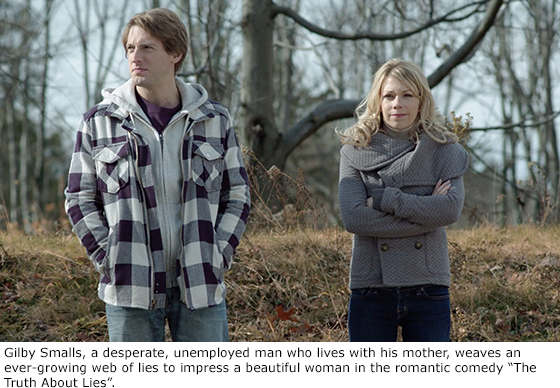 Gilby is having a meltdown. He’s just been fired from his job, lost his apartment in a fire and his girlfriend gave him the boot. And it’s only Wednesday. Now, at the ripe old age of thirty-something, he is forced to move in with May, his booze-swindling man-obsessed mother. This is the last straw.

Gilby’s life is bleak until best friend Kevin drags him to a family get-together, where he meets Rachel, Kevin’s very beautiful but very married sister. Rachel is the very thing Gilby needs to get his life back on track. Desperate to impress her, Gilby starts to weave a web of lies; one bigger than the next. Now in a sticky mess, Gilby is forced to face the uncomfortable truth about himself before he can find a way out of his very own Lies.

“The Truth About Lies” explores the potent role lying plays in relationships and life with some surprising results!