Sedona AZ (March 28, 2017) – The Sedona Police Department has begun planning for its next K-9 officer, beginning with a calculation of costs for police dog acquisition and care, and K-9 and handler training. Chief David McGill says the short-term costs include purchase of a dog that meets select criteria, while training for both the K-9 and its handler can add a significant amount.

“The cost of a dog and initial training it receives before the city takes possession can run anywhere from $9,000 to $12,000. After the dog is purchased, the dog and handler will train as a team in patrol and detection, which costs approximately $10,000 more. We also need to plan for maintenance training, equipment, and care,” he says.

The chief hopes to raise a total of $25,000 to cover initial and longer-term costs of the new K-9. 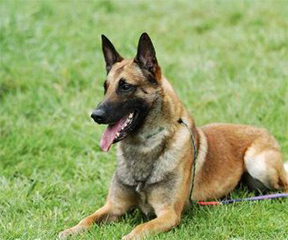 Most police K-9s are selected at 18-months based on personality, drive and ability to respond to commands; they must be alert, calm, obedient and smart. Handler and dog will train to receive team certification in narcotics detection and patrol handler. Narcotics training last approximately 5 weeks with patrol training an additional 5 weeks. After becoming a certified team, the handler is responsible for a minimum of 16 hours of ongoing training each month with a recommended annual recertification.

Training is rigorous, to ensure that the K-9 can handle a wide variety of tasks and situations. Dogs must be able to perform under stress, in chaotic and sometimes dangerous environments, sometimes with very little direction for their handler. They will be exposed to firearms fire and other loud noises, and staged criminal incidents.

“The K-9 program is invaluable to the city,” says Police Sgt. Stephanie Foley, “and being a handler requires dedication to taking care of the dog 24/7, attending trainings, maintaining training records and staying current on case law.” Foley was the handler – and is now owner – of retired K-9 Officer Dalan, a Belgian Malinois. Dalan’s retirement from the force on March 14 created the vacancy that the department now needs to fill.

“We have so many dog lovers, and police supporters, in Sedona,” says Chief McGill, “it would not be surprising to see a group coalesce to help the city fund the acquisition and training of our next K-9.”

Any group interested in supporting the effort can contact the department at 928-282-3100. Individuals who wish to donate can do so by cash or check, delivered or mailed to the Sedona Finance Department, Attn K-9 Donation Fund, 102 Roadrunner Dr., Sedona, Arizona, 86336.

Donate online by credit card at the  Sedona K-9 Donation Fund page. All donations are tax deductible; a receipt will be provided upon request.