Sedona AZ (December 11, 2014) – The Board of Trustees of the Sedona Art Museum is pleased to announce that award winning architect Sedona’s own Howard Madole has designed the proposed museum.

Howard Madole is acknowledged as Sedona’s first architect and an award-winning master of mid-20th century modern architecture in Arizona.

Mr. Madole came to Sedona in 1948 to help his parents develop 10 acres of land. He was involved with Frank Lloyd Wright at Taliesin West where he helped to build the Usonian design structure there. He went on to pioneer his own style with signature elements, including the use of native shist stone, wood 2x4s on edge for roofing materials, flared roof lines, unusual pitched and shaped structures, and fireplaces that penetrated large glass walls. 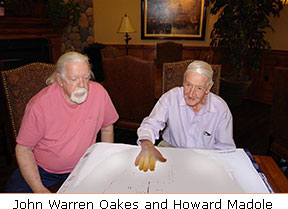 Over the years, Madole not only created innovative designs, but he built the largest construction business in Northern Arizona and built award winning homes and contemporary commercial buildings in Phoenix. Several of his signature homes survive in Sedona, and four have been designated Sedona Historic Landmarks. His work is recognized and followed by mid-20th century modern architecture aficionados.

The proposed Sedona Art Museum will be environmentally conscious with solar cells, hempcrete construction and LED lighting. Cost to build is estimated at $750,000.