Sedona AZ (March 13, 2012) – World-renowned Native American stone and bronze sculptor Doug Hyde is having a very busy year. Fresh from a show at the Autry National Center in Los Angeles, he will travel to the National Cowboy & Western Heritage Museum in Oklahoma in June, and then it’s off to the Eiteljorg Museum of American Indians and Western Art in Indiana in September and the Gilcrease Museum in Oklahoma this fall. Sedona art collectors are fortunate that Doug has managed to squeeze in a show, “Earth, Stone and Fire,” at Rowe Fine Art Gallery on April 6 from 5 to 8 p.m. during the Sedona Gallery Association’s 1st Friday Gallery Tour. Doug will be sculpting in the gallery, and he will lead a Q&A from 5:30 to 6:15 p.m. The show will continue through April 27. Wine and appetizers will be served. 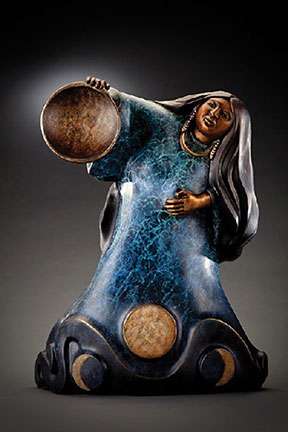 Doug was born in Oregon of Nez Perce, Chippewa and Assiniboine heritage. Before serving in the Army during Vietnam, he studied art at the Institute of American Indian Art in Santa Fe and at the San Francisco Institute of Art. He has been working as a full-time artist since 1974.

Doug carves wildlife and figurative sculptures using materials such as marble, alabaster, onyx, limestone and bronze. He will debut a black steatite stone carving titled “Drum Echoes Through Our Hearts,” during his Sedona show. “Stone is my first love,” says Doug, whose studio is located in Dewey. “I’ve been working on so many large pieces for the museum shows that it’s nice to focus on some smaller sculptures for a change. But I might have a surprise or two in store for Sedona collectors.”

Doug’s sculptures are included in collections at the Smithsonian National Museum of the American Indian, the Heard Museum, the Museum of the Southwest, the Amon Carter Museum of American Art and the Colorado Springs Fine Art Center in addition to the museums listed above. Doug is also a fellow member of the National Sculpture Society.