Jerome AZ (April 27, 2016) – Gallery 527 in Jerome welcomes Ben Roti into the fold of talented artists. Ben Roti is a ceramic artist originally from Spirit Lake, IA. He attended the University of Iowa in Iowa City, IA, from 2006 to 2010 and graduated with a Bachelor of Fine Arts degree in Ceramics. During college, Ben’s ceramic work concentrated on the elements of world conflict culminating in his BFA show, “The Cost of War.”

After finishing his BFA, Ben accepted a position as a studio assistant to ceramic artist, Don Reitz in Clarkdale, Arizona. Over several years (2006-2010), Ben had the opportunity to work with Don Reitz in the studio, assist with workshops in Montana and Florida, and was instrumental in the installations of gallery shows in Chicago, Denver, and Kansas City. At the Reitz Ranch, Ben furthered his knowledge in atmospheric firing with wood and salt types as well as a soda kiln in St. Petersburg, FL. He also was a part of constructing and repairing kilns. 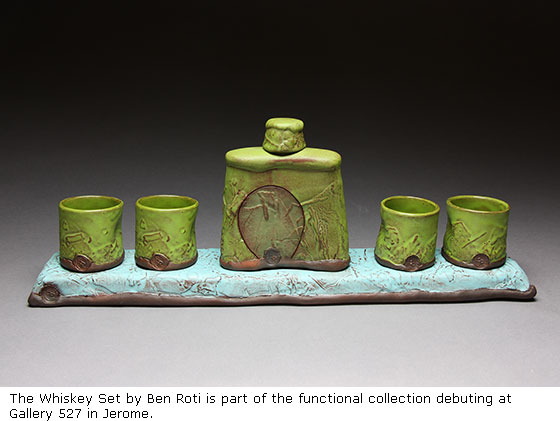 Since leaving the Reitz Ranch, Ben has returned to creating functional works using lowfire earthenware clay and has begun to develop a new body of work. Using reductive techniques, through sandblasting, Ben is able to build variations and create layers, which are inspired by the results that are commonly seen in atmospheric firing.

Ben’s current ceramic work is made with low-fire earthenware clay and features bright, vibrant colors. Using reductive techniques, through sandblasting, Ben is able to build variations and create layers, which are inspired by the results that are commonly seen in atmospheric firing.

Each piece is hand-built using soft slab technique, glazed, and fired. The pieces are sandblasted on the outside for a matte finish, then hand-sanded with wet/dry sandpaper for a soft, velvety feel, while the interior remains glossy and food-safe.