Cottonwood AZ (February 4, 2021) – Old Town Center for the Arts is pleased to announce its first online – live stream event. Join us for a special Valentine’s Eve Live Stream Concert with the renowned harp-guitarist Muriel Anderson on Saturday, February 13th at 7:00 pm MST.  Musician, instrument maker and Co-Director of Old Town Center for the Arts William Eaton will open the concert with a special musical tribute. The concert will be broadcast from OTCA in Cottonwood with Muriel joining ‘virtually’ from Nashville.

Named by Guitar World as one of 8 amazing female acoustic players, Muriel Anderson is one of the few international touring harp-guitarists. Her obvious joy of music, humor and her facility across the genres of folk, classical, jazz, bluegrass and international music is revered by guitarists worldwide. An engaging performer, Muriel’s unique approach to the instrument virtually transforms the guitar into a lyrical choir, then a marching band, a Japanese koto, a Bluegrass band, and then she may launch into a Beatles classic. 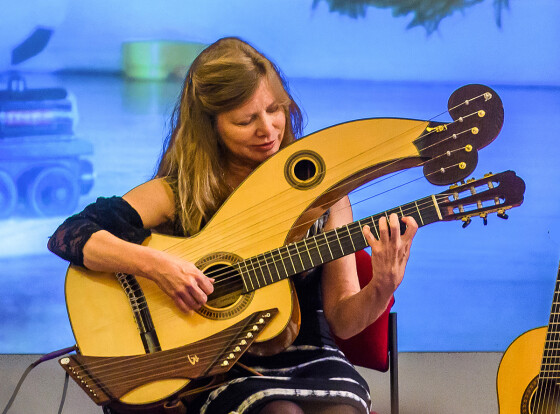 For this special live stream concert viewers will experience Muriel’s exquisite Audio-visual show.  In this must-see, must-hear concert, Muriel’s world-renowned guitar and harp-guitar playing is highlighted by a backdrop of stunning visuals by celebrated photo-artist Bryan Allen.  When Muriel first encountered Bryan Allen’s work, she knew she had found her artistic soulmate–she was amazed to find that his photo-art was saying the same thing as her music. They went on to create the award winning Nightlight Daylight CD, and in the process discovered that their artistic affinity extended to the heart. They started working on how to combine their artistry in a live context, and this show is the result. Bryan’s stunning visuals provide an insightful backdrop to Muriel’s music, accentuating the audience experience as never before. Together they bring you on a journey around the globe, full of joy and humanity, with new tunes, old favorites, stories and images.

Her current release “Acoustic Chef” is a CD of music from around the world with a cookbook of recipes and stories to go with each tune. A portion of the proceeds benefits the charity she founded, The Music for Life Alliance. Her new TrueFire channel brings her in-demand teaching to a wider audience. Muriel is host and founder of the renowned Muriel Anderson’s ALL STAR GUITAR NIGHT®.

Her previous release, “Nightlight Daylight” is a double CD and has won first place in its category in 11 national awards. Guitar Player Magazine listed “Nightlight, Daylight” as one of the top 10 CD’s of the decade! It features Muriel’s concept – the first ever interactive lighted CD cover and includes collaborations with her friends and fellow musicians Victor Wooten, Phil Keaggy, Mark Kibble of Take 6, Danny Gottlieb, Stanley Jordan, Tommy Emmanuel, Earl Klugh, and Howard Levy, among others.

If not busy enough as a world class performer Muriel Anderson has released more than a dozen instrumental CD’s, seven instructional DVD’s and guitar books published by Hal Leonard, Mel Bay, and Zen-On Japan.  Her compositions include commissioned classical works for the Nashville Chamber Orchestra and Vox Caelestis Womens Choir, as well as songs, which have appeared as title tracks for three albums by various artists.

William Eaton will open the live stream broadcast from the stage at Old Town Center for the Arts in Cottonwood.  William is acknowledged as one of the world’s great designers and builders of unique guitars and stringed instruments. He is a four-time GRAMMY nominee, NAMMY (Native American Music Awards) winner, and long-time recording artist for Canyon Records. Eaton is also the current director of the longest running guitar making school in North America, Roberto-Venn School of Luthiery, a school he co-founded in 1975.

Join us for Muriel Anderson with special guest William Eaton, live stream concert on Saturday, February 13th at 7:00 PM MST. Tickets are $10 Individual, $15 Family. Tickets are available online at showtix4u.com (on home page under ‘Find an Organization’ enter Old Town Center for the Arts, then click on Muriel Anderson event and ‘buy stream’ to fill out your ticket order).   Or use this direct link https://www.showtix4u.com/events/317.

When you buy your ticket, please consider making an additional donation.  These times are difficult for artists and venues.  OTCA has been closed since March 2020.  OTCA Online Concerts allow you to enjoy the same caliber of performance you’ve witnessed at the OTCA Theater, from the comfort and safety of your own home. Once you purchase a ticket online, you will receive via email, instructions and a login code to use on your own desktop computer, laptop, smart phone, or tablet.  You can sign in up to 60 minutes before showtime.  For further information visit oldtowncenter.org or contact OTCA at 928-634-0940, or Kimberly Kelley 615-406-3689 for technical assistance.

Muriel’s endorsements speak for themselves:

“Muriel Anderson is a good friend and a great guitarist.  She deserves national recognition”
…Chet Atkins

“Just one hell of a great player …a great personality and what I like is the touch that Muriel has on the guitar, the way she plays it like we all wish to play.”
…Les Paul