Camp Verde AZ (January 31, 2021) – Modeled after OneBook AZ, OneBook Experience seeks to bring the Verde Valley communities together through the experience of shared literature. This is your opportunity to read Vanished Arizona: Recollections of the Army Life of a New England Woman by Martha Summerhayes through the month of February and experience an example of what life was like before women had a voice or a vote. Then, click HERE to join in a Virtual Book Discussion facilitated by Amber Polo Thursday, February 25 at 10:00a. A limited amount of copies are available on a first-come-first-serve basis at Camp Verde Community Library, Cottonwood Public Library, and the VOC branch of Sedona Public Library. 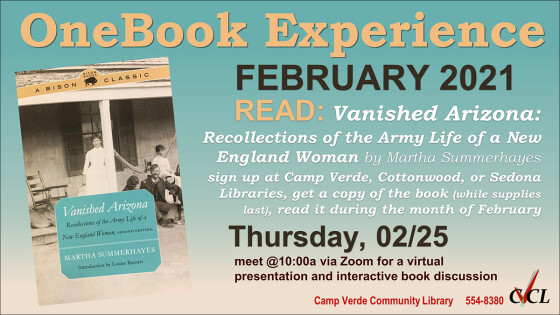 “When Martha Summerhayes (1844-1926) came as a bride to Fort Russell in Wyoming Territory in 1874, she “saw not much in those first few days besides bright buttons, blue uniforms, and shining swords,” but soon enough the hard facts of army life began to intrude. Remonstrating with her husband, Jack Wyder Summerhayes, that she had only three rooms and a kitchen instead of “a whole house,” she was informed that “women are not reckoned in at all in the War Department.” Although Martha Summerhayes’s recollections span a quarter of a century and recount life at a dozen army posts, the heart of this book concerns her experiences during the 1870s in Arizona, where the harsh climate, rattlesnakes, cactus thorns, white desperadoes, and other inconveniences all made for a less-than-desirable posting for the Summerhayeses. First printed in 1908, Vanished Arizona is Summerhayes’s memoir of her years as a military wife as her husband’s Eighth Regiment conducted Gen. George Crook’s expedition against the Apaches. It was so well received that she became an instant celebrity and the book a timeless classic. The book retains its place securely among the essential primary records of the frontier-military West because of the narrative skill of the author and her delight in life. “

This program is part of the Voices and Votes Special Programs & Events Experience currently at the Library.  Voices and Votes: Democracy in America has been made possible at Camp Verde Community Library by AZ Humanities Council. Voices and Votes: Democracy in America is part of Museum on Main Street, a collaboration between the Smithsonian Institution and State Humanities Councils nationwide. It is based on an exhibition by the National Museum of American History. Support for Museum on Main Street has been provided by the United States Congress.

Camp Verde Community Library is located just off of Montezuma Castle Highway at 130 Black Bridge Road, Camp Verde AZ. For more information about this or any other library program visit the library’s website at www.cvlibrary.org or call 554-8380 during library open hours Mon-Sat 9am-5pm.